Five years ago today a massive earthquake struck Haiti and displaced more than 1.5 million people. Ahead of the anniversary, Jean-Wickens Merone visits Adeline and her three children, one of the families that World Vision helped to find a fresh start. 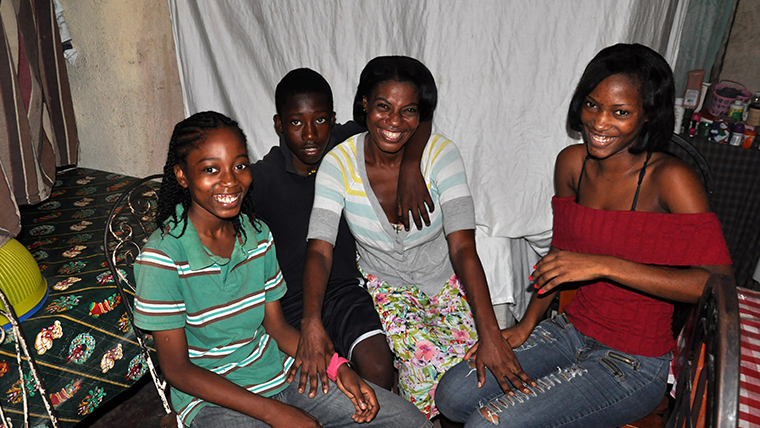 Jerry, Ernst, Adeline and Nadine sit in the new house that World Vision has built

I dodge electrical wires as I make my way through narrow alleyways that snake their way through concrete houses clinging to the sides of the mountains above Port-au-Prince. On my way I pass a small house fronted by vendors’ stalls selling all kinds of things including charcoal, soap, canned milk, clothes and fried foods. Children yell “Good Morning” and wave as I pass.

I’m on my way to meet Adeline and her three children Nadine (17), Ernst (15) and Jerry (13). With the help of World Vision, Adeline and her children have been living in a two room concrete bunker house in this densely packed community since December 2013. But the four years before that had been very different and very difficult.

On the 12 January 2010 a powerful earthquake struck. It lasted just 35 seconds, but destroyed Adeline’s home and all that she possessed. Adeline’s husband died the next day due to untreated injuries from the earthquake. It was a devastating time for her and her young children. In the days before the quake, Adeline was just about making ends meet. She sold cooking oils and together with her husband’s income they made enough to keep her children in school, feed them, and pay the rent.

Following the quake Adeline and her children salvaged what they could from their home and moved onto a piece of abandoned land at the bottom of the mountain. Together with 69 other families, Adeline set up home in a small plot bordering a ravine. With help from NGOs Adeline and her three children put up the tent that was to become their home for the next four years.

The community was named Camp Sodom and it was not an easy place to live. The day I visited the camp, it was a roasting 45C, and with no trees there was no shade to hide from the sun’s rays. The ground was rough gravel and dirt. Sometime during the camp’s first year a toilet block went up, but no other facilities were ever built.

For four years, Adeline’s family lived off of a small supply of rice and beans brought by her sister every fortnight. Without any source of income however, Nadine, Ernst, and Jerry all had to leave school. In their makeshift camp, Adeline couldn’t afford the fees to send her children to school – the choice was food or school.

After three years the owner of the small strip of land Camp Sodom had been built on decided he wanted it back. He had the toilet block demolished to encourage families to move on. Adeline now laughs as she tells me the story, “For almost a year, we did the toilet in plastic bags, but not everyone was so thoughtful.”

By the end of 2013, Adeline was desperate and completely demoralised. She and her children had lost a dangerous amount of weight. “I looked like a stick. I prayed, God deliver us from this place, show me some hope, please God do something to help,” Adeline remembers sadly.

When World Vision began visiting the camp to help transition people out, it seemed that Adeline’s prayers had been answered. The government had set up a scheme and was working with World Vision to provide grants for families to find and rent an appropriate property for one year and to set themselves up with some kind of small business.

Adeline wasn’t quite sure what it all meant, but for the first time in a long while she saw a glimmer of hope. “When I saw the World Vision team, I had hope that my children would be delivered and that we could get out of this place. It was the first time I had hope in a long time.”

Today, one year later, I am sitting with Adeline and her children in the curtained front room of her little concrete house on the mountain. From her window we look down on the land that was her home for four long years. Despite the tears in her eyes as she retells her story she is happy and laughs often.

Thanks to the grant she received, Adeline now has a small business making and selling peanut butter, and earns enough to enrol her children in the new year of school that starts next month. Brand new pressed uniforms hang wrapped in plastic on the wall, waiting for the day that she never dared to imagine would come.

With her sister’s help Adeline and her children are now healthy and happy. Now 17-years-old, Nadine is a beautiful young woman, shy at the moment with me in the room, but happy with her friends in their tight-knit community. At just 15, Ernst has become the man of the family in his father’s absence. Like Nadine, he is also shy but he sits protectively close to his mum. He has a look of warning in his eyes, silently telling me ‘don’t mess with my Mum’. His younger brother Jerry swaggers into the room with long braided hair and a confident eye-sparkling smile. He slaps my hand in a high five as he sits down.

When I was here right after the earthquake four years ago, the city was a mess. The destruction left over 1.5 million people displaced and homeless. Today there are still about 55,000 people living in camps, but the majority have finally found new homes, and camps have been closed. Public spaces are once again available and used by residents. The sides of the roads are lined with stalls selling fruit and paintings.

Whatever happens next, Adeline has faith that things will continue to improve for the people of Haiti. “At the moment I only have enough for food and school, and without a husband to help it is tough. But God will provide, I am praying that God will provide.”