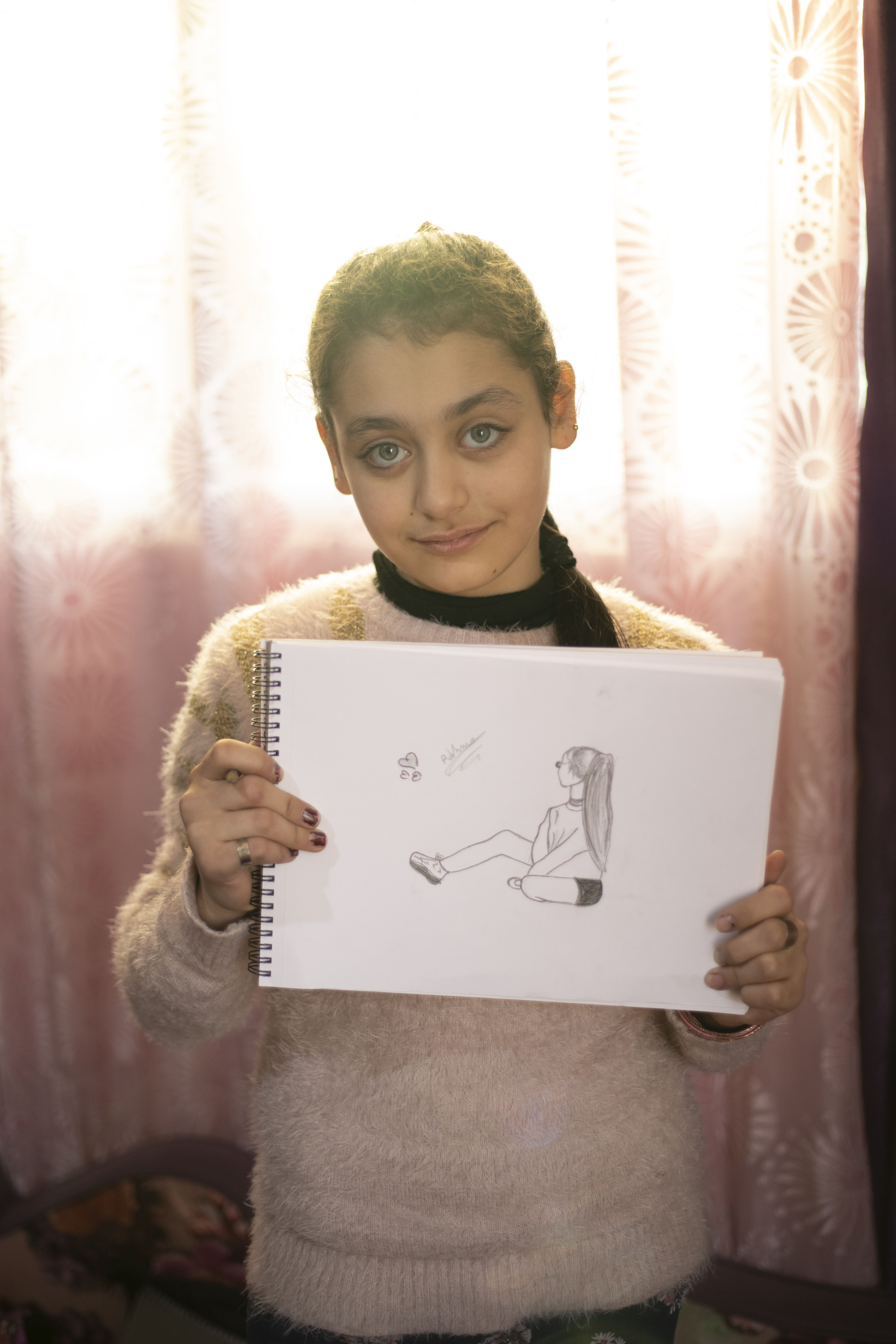 Rahma's love of drawing gives her hope for the future

Think back to when you were ten years old. What was life like for you then? School, family, friends, hobbies? Probably not an entire lifetime defined by war and hearing stories of a home you can no longer remember or even imagine.

Ten-year-old Rahma and her family were forced to flee the war in Syria in 2013, living first in Zaatari Refugee Camp before moving on to Irbid, Jordan. All Rahma has known is a life of war and worry, like a whole generation of other Syrian children.

The COVID-19 pandemic has introduced another crisis for families who were already struggling. Families like Rahma's have to stay home in overcrowded housing. Parents can no longer go out to find ways of earning a little income. Children are missing out on school, and the chance to meet with their friends to learn, play and simply enjoy being children.

Yet, for all that she’s lived through, Rahma still finds inspiration around her and is able to express herself through her great passion – drawing. Her walls are covered with the portraits she’s drawn, mainly the faces of friends and family. Of the strong and caring women, Rahma aspires to be like them when she grows up.

“When I draw, I feel it comes from the inside. It lets me show my personality,” she explains.

Not only does it allow her to express her creativity, but it also lets her escape a childhood dominated by war.

When I draw, I feel it comes from the inside. It lets me show my personality.

Ibtihal, Rahma’s mother, is proud of her talented daughter and supports her in any way she can. Knowing how happy and focused Rahma is when she’s drawing, Ibtihal encourages her to excel in her art. She also sees her younger self in her daughter, and her own dreams that she never had the chance to follow. “She reminds me of something I wanted to achieve but couldn’t. So I want her to achieve it. I wanted to become someone with a purpose, but the way life worked out didn’t allow that to happen,” she recalls.

Thanks to a local World Vision project, Rahma and her siblings are supported through a remote education programme where they learn Arabic, English and Maths. There are other online activities for children to take part in too, ranging from drawing to drama, reading and sports.

When her teachers spotted her talent, World Vision also supplied Rahma with the art equipment she needs to develop her skills.

What helps me is that when the teachers draw, they would give us a better idea on how to draw and they teach us many more things.

Despite her young life being dominated by hardship, Rahma still has hopes and dreams for the future. “I want to be a doctor and an artist,” she expresses confidently. But her greatest dream of all is to have her portraits exhibited one day.

With your help, we’ll continue to save and protect the most vulnerable children living in the world’s hardest places. Helping them survive, recover from trauma and rebuild a future.

How you can help vulnerable children

Find out how you can help the most vulnerable children in Syria.

1. Why is the war in Syria still taking place?

The lack of political leadership, and the external military intervention— including the provision of arms and military equipment, training, airstrikes, and even troops—in support of proxies in Syria threatens to prolong the conflict. While levels of violence have reduced significantly, over 11.1 million people in Syria still require humanitarian aid. Fighting has also intensified in the last month, leaving a dozen dead just at the beginning of February 2021.

The government forces and the non-state groups are unable to agree on the future and continue to seek control. Syria’s spiral into an increasingly deep financial crisis has led to growing tensions as 90 per cent of the country is now living under the poverty line. This adds to the negative prospects of a resolution being found anytime soon.

The emergence of COVID-19 also poses a great risk both for an ISIL resurgence and for conflict-affected refugee and displaced communities, and threatens to exacerbate the country’s existing health, economic, political, and security crises.

The Syrian civil war started with peaceful protests. Young people took to the streets in Syria’s southern city, Daraa, in March 2011, seeking government reforms. The movement was part of the social media-fuelled Arab Spring that swept through the Middle East and North Africa. March 15, dubbed the “day of rage,” was a turning point, which is why it is internationally recognized as the anniversary of the Syrian civil war.

As protests spread through Syria, they were countered by strong government crackdowns and increasing violence from both government forces and protesters. By the following year, Syria was embroiled in a civil war, with the Syrian military opposing a growing number of militant groups. Conflict has torn apart the lives of millions of Syrian children and families as government forces and militant groups fight to take and rule territory, resulting in what is now known as the Syrian refugee crisis. The country’s weakened governance, as well as the destruction of its social services and institutions, make Syria a textbook case of a fragile state.

3. How have children been impacted by the war in Syria?

Now in its 10th year, the Syrian conflict has led to more than 600,000 deaths and displaced an estimated 13 million —over half of Syria’s pre-war population. Over 6.2 million Syrians are internally displaced, and 5.6 million are refugees, predominantly in Lebanon, Jordan, and Turkey. Half of them are children and many of them have never known a time without war. For millions of them, the conflict has stolen their childhood and affected their long-term physical and mental health as well as their prospects for the future. Many children caught up in this crisis have lost family members and friends to the violence, suffered physical and psychological trauma, and had to leave school. Since the COVID-19 pandemic hit, their access to education was reduced, stress and worries for the future increased and are pushed into deeper vulnerabilities than ever before.
An estimated 55,000 children have been killed since conflict began, and the overall death toll is estimated to be well almost 600,000.[i]
Half the population has been displaced: 6.2 million people are displaced within Syria, and about 5.6 million Syrians are refugees. Most of them are in neighbouring Lebanon, Jordan and Turkey. About 40 per cent of those displaced, both in Syria and beyond, are children.
Since the war started another 4.8 million Syrian children have been born.[ii]
An estimated 40% of Syrian children below the age of 17 are living as registered refugees in neighbouring countries

4. What is World Vision doing to respond to the conflict?

a. World Vision and its implementing partners have assisted 2,414,230 people between October 2018 and April 2020, including 1,374,309 children, using a holistic approach through various programmes.
b. World Vision provides water and sanitation by supporting water stations, and delivers emergency assistance, including kitchen kits, hygiene kits, winter assistance and multi-purpose cash grants through its Rapid Response Mechanism.
c. In response to child marriage and the number of other child protection threats faced by girls and boys, World Vision is providing a number of essential services for children including health centre services, child-friendly spaces, women and girl’s safe spaces, mental health and psycho-social support, case management, gender-based violence prevention and response services, and awareness-raising sessions with children on child protection and gender-based violence. Adults, including parents and caregivers, are also provided with psycho-social support services and parenting skills support.
d. To mitigate the immediate and longer-term impacts of the COVID-19 pandemic on households and children, World Vision has adapted its work with a number of essential services and supports now temporarily provided remotely where possible, to ensure the safety of children and communities, including remote case management, mental health and psycho-social support, gender-based violence prevention and response, parenting support, and remote learning resources and materials among other key interventions.