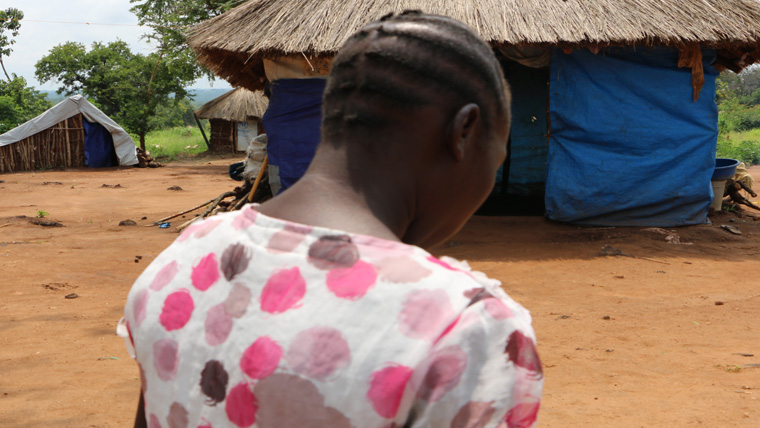 Eva is three months pregnant, and is terrified of what the future will hold.

Eva was forced to flee her home in South Sudan with her mother, brother and young sister when fighting broke out in her home village earlier this year. Men “began killing each other, raping people and even burning houses down,” Eva recalls.

Sitting on a handmade wooden chair in the middle of Uganda’s Imvepi refugee settlement – one of 125,000 people who fled there from war and famine in neighbouring South Sudan – her story is sadly not unique. There are now almost a million South Sudanese taking refuge in Uganda. The majority have experienced unimaginable suffering along the way.

As they fled on foot, Eva’s family was ambushed. Rebel soldiers took away her mother – and Eva doesn’t know where she is now, or even if she is alive or dead.

Forced to continue running, the children soon faced another atrocity. They were ambushed a second time, and Eva’s brother was shot and killed. Eva and her sister had no time even to bury him. They left his body by the side of the road and kept running.

“I continued with my sister, when we met four men with a car. They said they were travelling to Uganda too, so we said we would go with them,” Eva says.

But instead, three of the men took her young sister, just eight years old, away. The man that remained hit Eva, and raped her.

The men eventually brought her sister back and then left the two girls by the roadside and drove away.

Eva doesn’t know what happened to her sister during those few hours. “I tried to ask her but she is telling me nothing. The men told her to keep quiet,” she says.

The girls found a group of women, also trying to reach Uganda, who stayed with them while Eva recovered. After two weeks, they began the long journey to Uganda together.

When she arrived at Imvepi, Eva – like everyone arriving at the settlements – received a medical check-up. It was then she was told she was pregnant. She doesn’t know what she will do when the baby arrives. "I would like World Vision to help me get someone to keep the baby so that I can go back to school,” she says. “I cannot manage to look after the child.”

Eva is one of thousands of South Sudanese children being supported by World Vision. Caseworkers visit her regularly, and have found Eva and her sister a foster family to live with while at Imvepi, so they are safe, fed and well cared for.