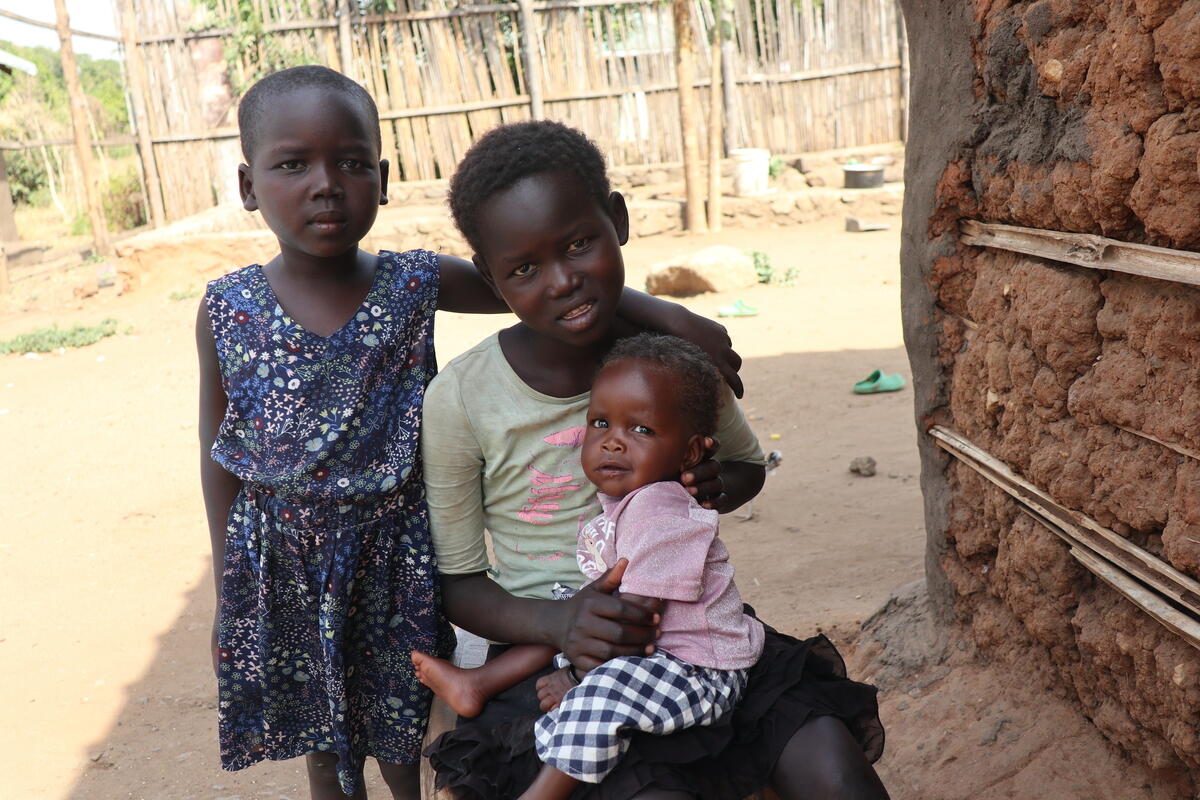 "I have to take care of the children, yet I don’t know anything."

This is a familiar cry these days, mainly from frustrated parents suddenly thrust into the role of lockdown supply teacher. But, here, it’s the frustrated plea of 11-year-old Paska. Even before coronavirus hit her country, South Sudan, her role had changed dramatically – from schoolgirl, to "mother-of-three". Sadly, Paska’s mother died giving birth to her baby sister Rose. Soon after, their father abandoned them.

It hurts to see that other children go to school, but we have to stay at home because no one can support us and I need to take care of Rose.

Left alone, Paska took on responsibility for her three younger siblings, dropping out of school to care for baby Rose. This wasn’t easy for Paska: "It hurts to see that other children go to school, but we have to stay at home because no one can support us and I need to take care of Rose."

The girls weren’t left entirely by themselves for long though. They were sent to live with their uncle who lived nearby. But he suffers from alcoholism and, fearing for the children’s safety, their aunt Lily stepped in.

Paska and her siblings now live with Lily in South Sudan’s capital city, Juba. But they’re not out of the woods yet. Lily has children of her own, and while she feels a sense of responsibility for her extended family, she admits, “I cannot provide for them”.

Paska says simply: “Our life was far better when our mother was alive, even if she didn’t have a job. Now it’s terrible.”

So Paska can’t relinquish the responsibility she’s quietly bearing. And for Rose, Paska’s sacrifice has been lifesaving. Without her mother’s milk, Rose became severely malnourished and for the past few months Paska has dutifully taken her to a nutrition centre for treatment. “I brought her to the centre every week because her situation was not good. Now that she has greatly improved, I take her once every two weeks.”

The nutrition centre in Juba is supported by World Vision, whose team is already supporting 4,370 severely malnourished children. Years of economic instability, conflict and drought have combined to endanger children’s lives in the most basic way – lack of food. And the number of children affected keeps growing.

Now a new danger looms. South Sudan’s first case of coronavirus was confirmed on 5 April 2020. World Vision’s Nutrition Manager in Juba, Rahab Kimani worries about the effects of the virus and the disruption it’s causing: "The closure of shops, markets and other means of income for families, will also affect their ability to buy food and essential supplies, especially for children."

In fact, the World Food Programme expects that across the world, the number of people without enough food could almost double due to the coronavirus pandemic.

And it means that normal health and support work is disrupted too. "This is my biggest worry – as well as the mothers I talk to. This pandemic, as people’s movements become limited, can deprive malnourished children and mothers of critical lifesaving nutrition services."

For Paska and her siblings this fear is very real. At least Paska doesn’t have the worry of missing school for the time being – coronavirus has temporarily closed the schools. But Baby Rose could miss out on getting better.

Rose is just starting to recover, but without continued checks and supplies of supplementary food she won’t get to full health, thriving, growing and developing as she should.

“These children need a safe and conducive environment to stay. They also need to go to school. Without proper care and nutrition, especially for the baby, she will continue being malnourished”, Watts says.

In South Sudan, World Vision will continue to do everything we can to help vulnerable families like Paska’s. We’ve been sharing health messages, providing handwashing supplies, food packages, and cash and vouchers, so families can stay safe and stay healthy. Children like Paska and Rose need this help now, more than ever.

This kind of work is truly lifesaving and can only continue thanks to the support of World Vision’s supporter community – thank you.