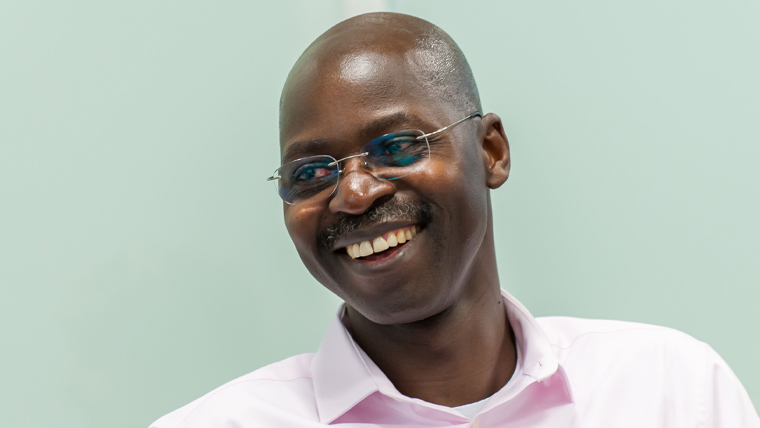 One year on: Time to pick up the pace

As we approach the one-year anniversary of the coronavirus pandemic, the UK has passed 20 million vaccinations, while the COVAX initiative delivers its first doses to Ghana and Cote D’Ivoire, aiming to provide protection to at least 20% of each country’s population.

The vaccine race is on – but it’s not a fair one, says World Vision's Partnership Leader of Global Field Operations, Dr Jean Baptiste Kamate, as he reflects on the things World Vision knows about working at pace and scale.

Humanitarians don’t stop. We work around the clock, we are focused on saving lives, we consult with people affected by a crisis, to identify their needs. We make plans – then we get on with it.

We don’t have time to wait or to waste.

Before COVID-19 hit, I was in the Philippines where I met Sara, a mother of seven children aged between 5 and 19. Sara comes from Marawi, a city destroyed by armed conflict in 2017. Sara and her husband were doing well before, but the conflict left them with nothing.

They were living in a temporary shelter, which was quickly becoming a permanent shelter. It was insufficient, and it meant the family had to endure extreme heat in the dry season and being constantly wet in the rainy season. They relied heavily on relief items we were providing – but it wasn’t enough. The conditions they were forced to live in were not good enough. Sara and her family did not have time to waste, waiting to rebuild their lives.

The humanitarian imperative requires “the right to receive humanitarian assistance, and to offer it” regardless of where or when. When the conflict escalated in Marawi in May 2017, our teams worked night and day doing two things at the same time – meeting the immediate, life-saving needs of families like Sara’s, and making longer-term plans to help recovery and rebuilding. So their children could return to school, so they could recover from the fear and violence, so Sara and her husband could begin to rebuild their lives and livelihoods.

You do everything you need to, to stop people dying.

Four things we know about emergencies

1. Focus on saving lives
This seems obvious, and it certainly comes naturally to us as humanitarians, but when you believe lives must be saved at all costs it clarifies your thinking in useful ways. It means you do everything you need to, to stop people from dying.

If it requires huge food distributions at short notice like it did in Port-au-Prince, Haiti, after the 2010 earthquake, or working 24 hours a day like it did last month after a typhoon hit West Sulawesi, Indonesia, or rapidly scaling up people and programmes as we are doing in Tigray, Ethiopia, right now, then we do everything we can to save lives. In our case, this comes from our passion and our belief in the humanitarian imperative. We don’t do it to be elected or to get people to like us. But this focus on saving lives at all costs doesn’t need to be restricted to humanitarians.

2. Be accountable
In our work, we are accountable to many groups of people, and this plays a role in our decision-making. Donors, both institutional and individual, and the children and communities we work with, deserve to know that every penny is spent where it should be. They deserve and are entitled to transparency around that expenditure. Donors we work with rightly demand high accountability from us. If some of these government vaccine rollouts were an organisation I was funding, I would reduce it.

3. No plan should take months to come together
A crisis, by definition, is when something unexpected happens and we have no plan. Countries that experience regular humanitarian crises, and organisations like ours which respond, are well-practised in putting large-scale plans together quickly.

The African Union had an impressive, early COVID-19 response strategy in March last year. I was in a meeting where they presented to us the data they were using to track the disease and plan their response. I was very impressed with their plans – the only gap was in the funding. In contrast, countries where funding is not the issue, seem to be struggling to publish a comprehensive response strategy.

Not for the first time, I wonder why we do not try and learn from the countries we traditionally write off as corrupt, helpless, poor, powerless. COVID-19 caught many countries by surprise, but we have now had more than one year to plan. It would be unacceptable for an organisation like World Vision to have no plan, one year into a disaster. Indeed, we had ours ready to go the day the World Health Organization declared a pandemic. Early plans aren’t perfect, and you revisit and reshape them, but getting them in place and acting on them quickly is so important.

4. Nothing gets done if you only work 9 to 5, Monday – Friday
Preventing a catastrophic moral failure, in the words of Dr Tedros, is not going to happen by working eight hours a day. It’s going to require us to rethink our sense of urgency. We need to save lives at all costs, doing whatever it takes.

Are world leaders prepared to do what it takes?

In a crisis like this, leaders are called to strike the right balance between being inward-looking and outward-looking. Between taking care of their family but also taking care of their neighbour. We know leaders are capable of this – helping Sara’s family rebuild their lives is only possible because of the generosity of donors. The question is whether in this crisis, which is affecting us all, are they prepared to do what it takes?

Give to our coronavirus appeal

Support families across the world through COVID-19