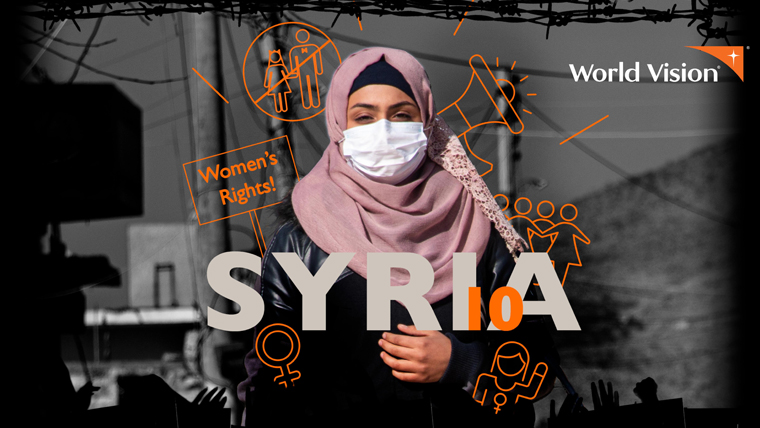 Growing up in the shadow of war

World Vision’s Claire Bardell reflects on the impact of 10 years of war on Syria’s children.

Where were you 10 years ago?

I was probably crawling around the floor with my 19-month-old son or chasing after my four-year-old girl. They’re both in secondary school now.

A decade of war

Ten years is a long time. A lot can change. Everything could change.

Ten years ago a conflict ignited in Syria. Civil war soon spread from Damascus across the nation. And now, the Syrian war has reached a new milestone – its 10th anniversary.

For Syria’s children, that’s ten years of childhood shaped by violence. While my children were learning to swim, running around the local woods and watching Frozen for the umpteenth time, Syria’s youngest have been fighting nightmares of bombing, hoping for somewhere safe to stay and even learning new languages to fit in with their new neighbourhoods.

From child - to refugee - to wife

When the Syrian war started, Fatimah was just eight. She lived in rural Aleppo but, in 2011, her family was among the first to flee the deadly conflict in Syria.

She’s now spent a decade of her young life as a refugee. Settling into Jordan was difficult, and a few years later she lost her beloved father. There was seemingly only one solution:
“My mother was forced to marry me to my cousin so he could take care of us and provide for us,” she says. Fatimah was just 14.

From there, Fatimah’s story got worse. She was forced to leave school and didn’t know what was expected of her as a wife. A year into the marriage Fatimah separated from her husband but her relatives wouldn’t allow it, and insisted she return to him. Fatimah then fell pregnant and gave birth to her first child. She had lost her childhood and was on the verge of losing all hope.

“I visited the centre to see what services were provided and registered in the young mothers’ club. I learnt many things that strengthened my self-confidence,” Fatimah says.

Finally, Fatimah’s decade took a turn for the better. She even went back to school to continue her interrupted education.

I felt that I exist.

The most important take-away for her?

“I felt that I exist, that I am a female that exists in this world. And I learnt new communication skills that improved the relationships in my family a lot.”

Emad is a case worker at the centre. She explains Fatimah’s idea to engage with other women and girls to put a stop to child marriage:
“She wanted to send out a message to women who had an experience similar to her own; what they could do, what they had to offer to society, and what strengths women in this situation should concentrate on.”

Even though it could put her in danger, Fatimah speaks out against child marriage and promotes the importance of girls completing their education.

Just like any teen, her go-to platforms are Facebook and Instagram, where she connects with other young women to support them and give them tools to find help in abusive situations.

Fatimah realised that social media groups were a great way to spread the word and reach girls not just from Syria, but all over the world. In the groups, she warns girls and young women about following old traditions and customs that encourage child marriage with all its dire consequences – from dropping out of school to teenage pregnancies, and worse.

“If I ran the world”

As she stands on the cusp of adulthood, holding her baby son, ten years of war, exile and lost childhood, have profoundly changed the shape of Fatimah’s life. She’s taking that experience and turning it into something good. But she knows that many more childhoods have been scarred.

How old will her own son be before there’s peace in Fatimah’s homeland?

Asked what she would do if she could run the world for just one day, Fatimah replies:
“I know I would not be able to change everything in one day, but I would do two things: firstly, I would end wars all over the world, then I would enact new laws for women, laws such as those prohibiting marriage of a female under 18 years of age.”

Enough us enough. The violence in Syria must end. Children need to live in peace again.

“Help us to end war in Syria, help us to end the tragedy of the Syrian woman, especially under these difficult times, in the times of COVID-19 and the violence against women.”

Donate now to our Syria appeal to help refugees