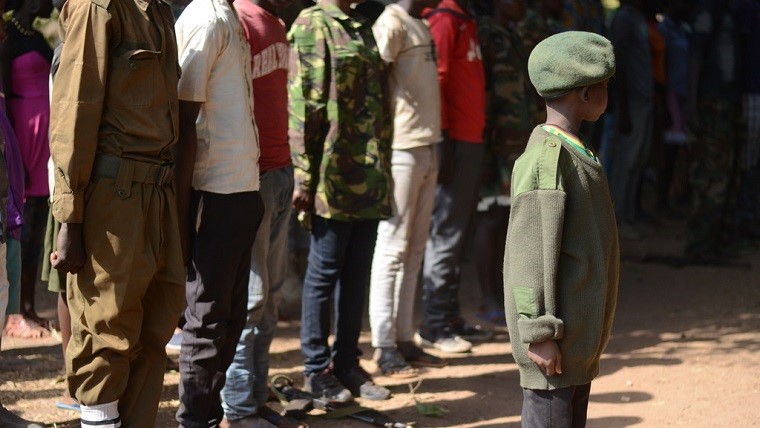 But labels mean nothing to children who are forced into horrifying exploitation by predators and by circumstances. For them, it is an all too real nightmare which can leave them with painful physical and emotional scars, and hinders their education and development well into adulthood.

Children like Angelique*, who I met in the Kasai region of the Democratic Republic of Congo last year. She had been pushed into a local militia at the age of 11 to defend her community and finally made a brave escape when she saw the army kill her parents. When I met her, she had walked for days to reach what she heard was a safe haven taking in kids like her.

She had only the clothes on her back and was just surviving – certainly not thriving. She was afraid to go outside because the army and policy were hunting down children who had been associated with the militia. All she wanted was a home, food to eat and the opportunity to go to school.

Before the fighting broke out, she had been at the top of her class and was hoping to become a lawyer…just as I am. When I asked Angelique what made her happy, she said having enough to eat and learning. When I asked what made her afraid, she said the army and “corpses”. It is not unusual for children to have fears – of real or imaginary things. But no child should have seen enough dead bodies to put these at the top of their fear list.

How do we stop it?

Ultimately, exploitation exits because there is a demand for exploited children, and a ‘supply’. In other words, there are too many children living in circumstances that make them vulnerable to being forced or coerced into this exploitation.

Think of Mao*, a teenage girl World Vision supported in Cambodia a few years ago. Despite both of her parents working, they were not able to support her and her six brothers and they ended up in debt.

She was sent to live with another family and one day her host asked girls and women living in the house if any of them wanted to sell their virginity. Worried about her family’s situation, Mao reluctantly agreed and she was sold for sex for about £150.

Poverty pushed her into sexual exploitation, from which wasn’t able to escape until one of her abusers, a foreigner, was investigated by the Cambodian government. Thankfully, she was then able to rebuild her life and reintegrate with her family through a World Vision project.

In order to end modern slavery, we must address both sides of the issue. It must become unacceptable in every community to exploit and abuse children in any way, with severe legal and social consequences for involvement.

Despite progress, this still remains a challenge. It is too financially lucrative for those whose business model is based on child exploitation. For example, easy and cheap access to light weapons means that armed groups can save money by recruiting children – who eat less, question less and may be more malleable.

On the other side, we must reduce children’s vulnerability to exploitation and abuse, by empowering them and protecting them.

Context, age and gender all impact on the vulnerability of children to various forms of modern slavery. Lack of access to education, poverty, hunger, insecurity and displacement, peer pressure and family breakdown are all factors which contribute to boys and girls ending up caught in modern slavery. Although these factors differ by context, circumstances, age and gender, the more vulnerability factors a child faces, the more likely they are to become exploited.

It takes a world to end modern slavery, and we can all play our part by calling on governments to do more to bring exploiters to justice and protect children here and abroad. We can also lead by example, giving our time, money and voice to protecting these children and creating a world free from violence for them.

To find out more about World Vision's work to protect children in modern slavery, visit our child protection page.

*names have been changed to protect identities