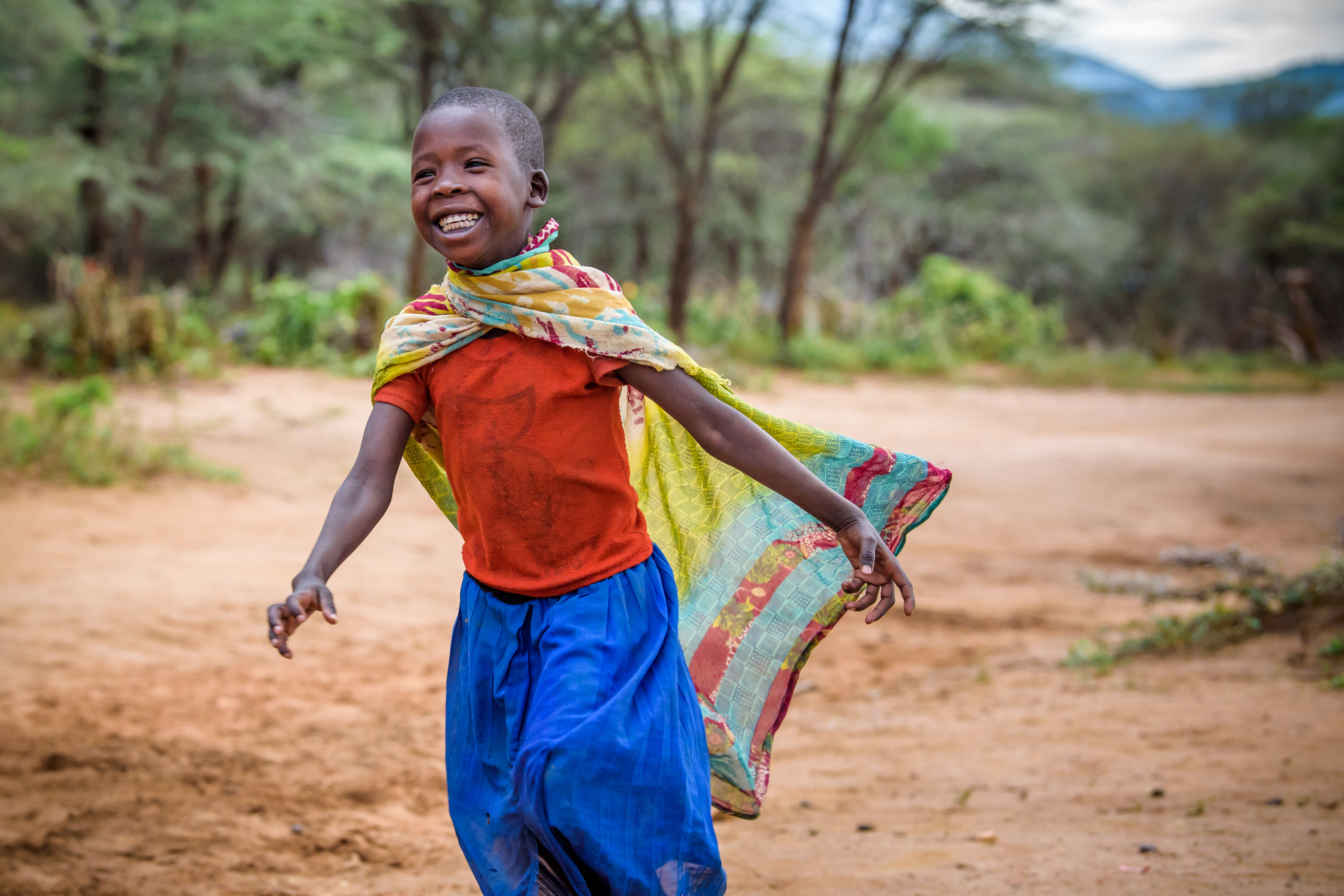 Thanks to supporters, Cheru's community has been transformed by clean water

The day the pipeline from the Kenyan hillside spring was completed, Cheru led her family, friends and neighbours – her eyes bright with amazement as she saw clean water flowing. Everyone cheered as Cheru’s dad filled the first glass and took a refreshing, life-giving drink.

That day was the start of a new life for Cheru and her family. At just five years old, Cheru would walk for more than three and a half hours each day with her six-year-old sister, Dina, to collect water. It was an exhausting, gruelling trip under hot sun. Little Cheru could only carry a kettle full of water, but she knew it was all important. “I help my mother,” she said.

The cost of this water was high. Not only was the journey long, costing children class time, but the water was contaminated, so their health suffered too.

A few months later and Cheru’s story transformed. People around the world heard Cheru’s tale and chose to help her and others like her. Across 30 countries, 64,000 people took part in World Vision’s Global 6K for Water and raised vital funds for water projects. And they made quite a difference.

The nearby schools now have clean water sources and toilet blocks, and Cheru’s village has several water points – one is even named after her!

“That day when the water first came, we ran to our houses and brought jerrycans to fetch the water because we thought the water would get finished,” says Cheru’s mother, Monica. “But seeing the water the next day, I went to my neighbours and I told them: ‘You all come and fetch and bring your clothes to wash. The water is not getting finished.”

"A gift from God"

Now six years old, Cheru helps with the laundry and dishes at home – but doesn’t have to face the dismal walk for water. Instead, the family have fresh, clean water just a few steps from their front door. So, Cheru is in school regularly now. In fact, as the local children can get to school on time now and they aren’t off sick so often, there’s a new problem… classes are overflowing! They’re building new classrooms to cope with the full attendance.

Water’s even reviving the community’s spiritual health. Mirroring her school’s experience, Cheru’s local church is brimming every Sunday as families are able to attend services. And they’re using the water to improve the church itself, saving up for bags of cement to create a concrete floor.

Just like in the Bible where God gave his people water from the rock, this water system is a blessing from God.

Clean water, nearby, is changing everything. Cheru can see a brighter future now – she dreams of becoming a doctor. And in the meantime, her mother has ideas to improve family life with their new resource, planning to plant a vegetable garden to grow fresh, healthy food for the family.

Cheru’s dad, Samson sums it up, with a smile: “We’re happy. The animals are happy. Even the birds are happy.”

Every step you take is one they don't have to

Cheru’s story is one from 74,000 lives transformed thanks to the Global 6K for Water in 2019. For your chance to help another vulnerable child – and their whole community – take a look at Global 6K 2020.

Do the Global 6K