This World Humanitarian Day, we are honouring the women who work on the front line of their own communities in some of the most difficult places. Those who make a huge contribution to make their societies a better place.

Qamar Al-Kurdi, 23, is Jordanian and based in the Syrian refugee camp Azraq. The camp currently has a population of over 35,000 refugees. She is a karate teacher with World Vision, an international children’s charity, and has done karate since the age of nine.

She explains that at first, her parents "disapproved", so she signed up without their knowledge. Qamar goes on to say; “One day I participated in the King Abdullah award for physical fitness, I won a gold medal and had the chance to meet the King. After this, my parents started encouraging me to participate in sport.”

Qamar explains; “The girls lived hard lives in Syria – they have shared with me the stories of how they left Syria and how they used to hear the warplanes. When they first arrived here, their psychological state was very bad.

“Life is hard for girls living in the Azraq camp as they have very few rights. They are not allowed to play or to go out much, and common traditions mean they aren’t allowed to continue in school and must marry at a young age." 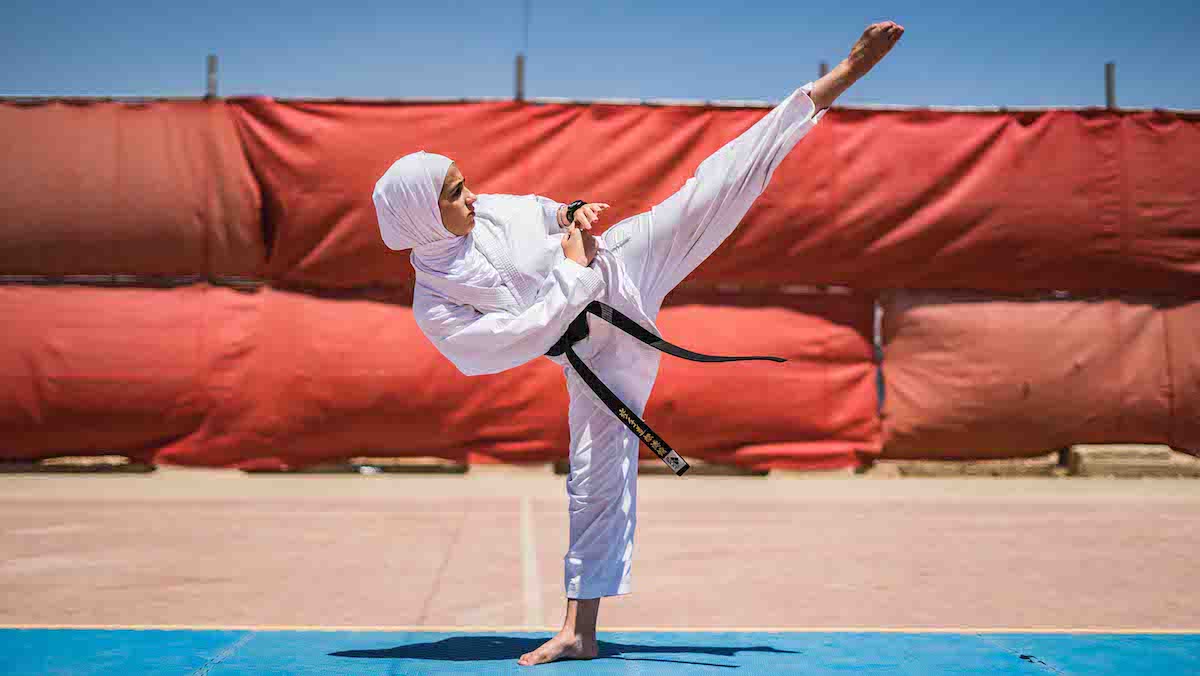 Few organisations support sports for girls. Girls used to hear from their families and communities that karate is an aggressive sport, and that girls shouldn’t play it. But when they [the girls] started getting involved, they began asking how they could level up [improve their skills].

When the girls first came here, they had no discipline – they couldn’t even stand in a line. They pushed each other around and fought a lot. They showed no respect for each other – not even for their teachers or classmates.

So karate has helped them to develop their discipline and learn rules about consequences.

The girls in the camp learn so much from Qamar about empowering themselves and inspiring confidence. She explains further; “Karate helps develop self-discipline and generates positive energy. It empowers self-confidence. Once they start performing in front of each other and in front of an audience, it improves their confidence that they could become a champion one day.”

Qamar likes it when the girls feel "self-empowered and confident" as it improves her confidence "when the girls are competing and achieving success."

She is just one of the many women around the world inspiring female power and perseverance. Empowering girls gives them the strength to face the harshest realities of their lives and offers them a chance to change their future, even in the most difficult of situations.

World Vision is urging members of the public to speak out on global girls issues on social media using the hashtag #StandWithHer and #1000Girls. To join the movement, click here.