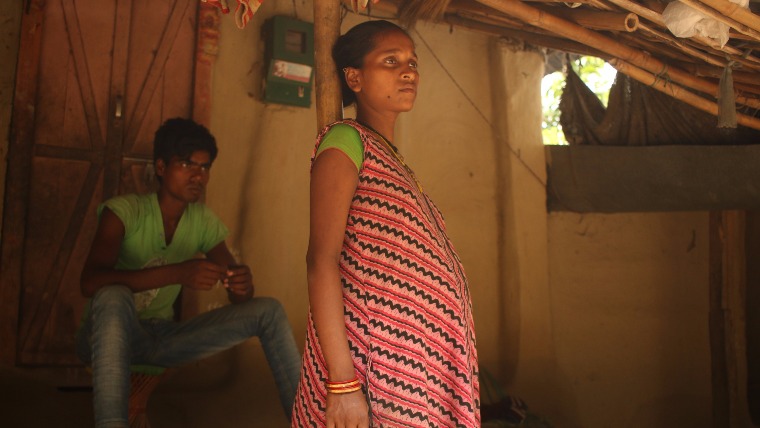 Ganga (not her real name) married at 14. Her and her husband (behind) lost their first baby.

International children’s charity World Vision today joined hands with the Nepali President, The Rt. Honourable President Bidya Devi Bhandari to launch a campaign aimed at ending child marriage in one of the most affected countries in the world.

President Bhandari, who last year shared a platform with Prince Harry at another international gathering focusing on the Himalayan country’s commitment to ending child marriage by 2030, described World Vision’s It Takes Nepal to End Child Marriage campaign as “indispensible”.

“[The campaign] is indispensable to eradicating child marriage. Early marriage adversely affects children and communities in Nepal. We express our commitment for this initiative."

Experts say Nepal currently has the third highest rate of child marriage in Asia with almost 4 out of 10 girls married-off before their eighteenth birthday. The region is particularly beset by the issue as child marriage rates in South Asia show that approximately half of all girls in the region are married before the age of 18, according to the UN.

Elizabeth Hanna Satow, National Director of World Vision Nepal, said: "Though the legal age of marriage in Nepal is 20 for both men and women, we still see child marriage being practiced in both rural and urban areas of Nepal.

“Child marriage is a human rights violation because it deprives children of education, health services, the chance to learn, grow and plan for a future. It pushes girls into a cycle of poverty. It takes a world to eliminate child marriage. Parents, schools, communities, government and the private sector all have a role to play.”

The campaign will lean on the support of the government, faith leaders and the private sector to strengthen legal and social systems and ensure that children and vulnerable women are fully protected across the country.

The media, especially local radio stations, will also be key in promoting the campaign and ensure citizens are aware of their rights. The influential media body, the Association of Community Radio Broadcasters Nepal (ACORAB), supported today’s launch of the campaign.

Subash Khatiwada, the president of ACORAB said: "Community radio and the wider media have a responsibility to push for positive social change."

The rate of child marriage in Nepal has decreased by 10% in the last decade. However, 10% of Nepali girls are still married off before the age of 15. And 11% of boys are married before the age of 18, according to a Unicef report in 2016.

A 2012 report published by World Vision, Save the Children and Plan International showed that the prevalence of child marriage varies significantly among Nepal’s many ethnic, religious and caste groups. The rate of child marriage is highest among marginalised and lower caste communities the study found.