We’re very grateful to have the support of famous volunteers to promote the work we’re doing throughout the world. They help us to throw a spotlight on our incredible development and emergency response work to ensure we make a real difference to the lives of vulnerable children living in the world’s harshest places.

Do you have any queries? Please email Deborah Fraser: deborah.fraser@worldvision.org.uk

Jerome has been sponsoring children with World Vision for almost twenty years. In March 2019, he visited South Sudan to meet former child soldiers, and spent time with children and families in a camp for people forced to flee their homes because of war. In 2017, he spent time in Myanmar with World Vision, seeing how the organisation help children recruited into armed groups, and visiting projects helping street kids and victims of human trafficking. 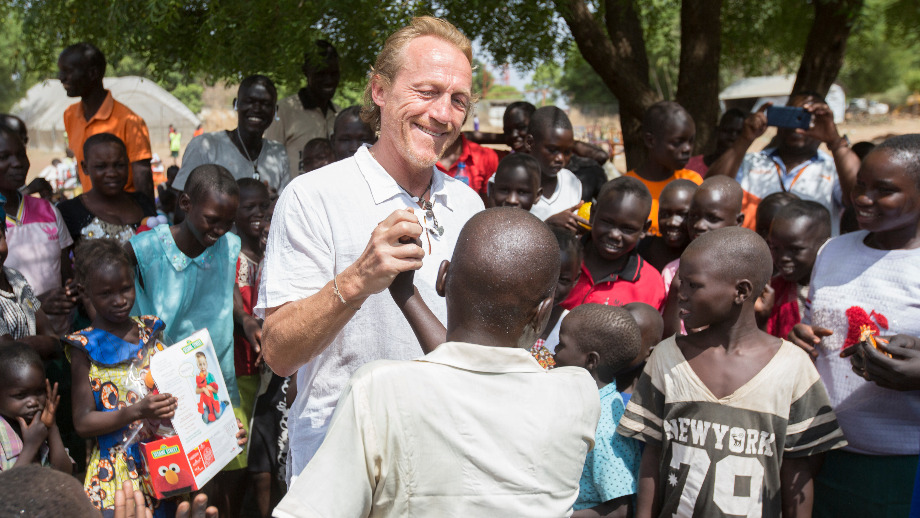 Having that personal connection to a child and her community is a special thing. It gives you back so much more than the amount it costs each month, and that’s a priceless thing to have in one’s life.

About Jerome: Jerome stars as Bronn in the multi-award winning HBO show, Game of Thrones. He shot to fame in popular TV series, Soldier, Soldier, and more recently appeared in the BBC’s Ripper Street. 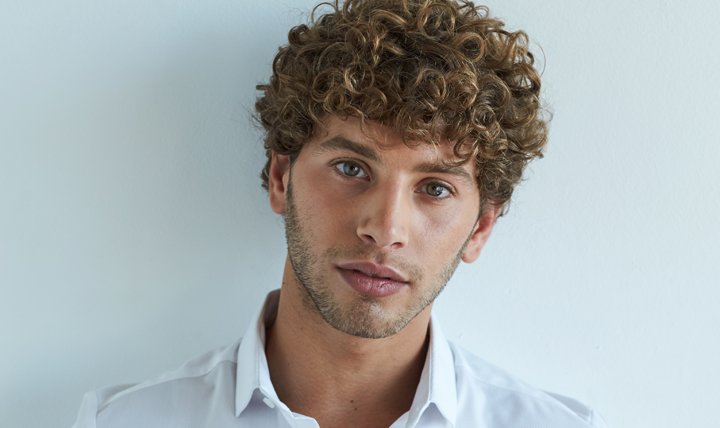 "I really admire the work that World Vision does, reaching the world’s most at-risk children. They’ve helped countless kids and their communities, both through child sponsorship and their emergency work. Every child deserves to have a happy future ahead of them, and it means a lot to be able to see first-hand the difference they are making."

About Eyal: Eyal Booker is a model and TV personality most recently known for appearing on ITV2’s hit show Love Island. He was on E4’s popular series, Celebs Go Dating, and continues to model for global fashion campaigns. He sponsors a child with World Vision in Sierra Leone.

In early 2016, Meghan Markle became a Global Ambassador with World Vision and travelled to Rwanda to see firsthand the importance of clean water and its impact on the lives of children and their communities. Inspired by our work, she joined us again in January 2017 on a visit to India, learning how stigmas surrounding periods and a lack of access to clean toilets prevents millions of girls from going to school, and how World Vision are working to increase girls access to education.

About Meghan: Meghan became the Duchess of Sussex on marrying Prince Harry in 2018. The pair have worked to shine a spotlight on the work of charitable organisations around the world. 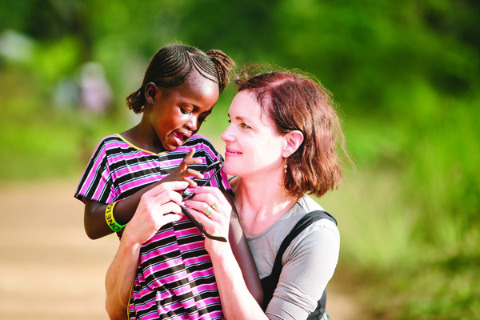 Elizabeth McGovern is an American film, television, and theatre actor living in London.

Elizabeth sponsors Jestina in Sierra Leone and in 2013 she travelled to Africa to meet her.

In 2014 she helped promote the #ANightOfHope campaign in a cover feature in Prima magazine.

About Elizabeth: Elizabeth McGovern is an American actress living in London. She is best known for her performance as Cora Crawley, Countess of Grantham, in the ITV drama series Downton Abbey. She was nominated for an Emmy Award and Golden Globe Award for this role. Elizabeth received an Academy Award nomination for her role as Evelyn Nesbit in the 1981 film Ragtime, and her other films include Ordinary People, Once Upon A Time In America and The Handmaid's Tale. 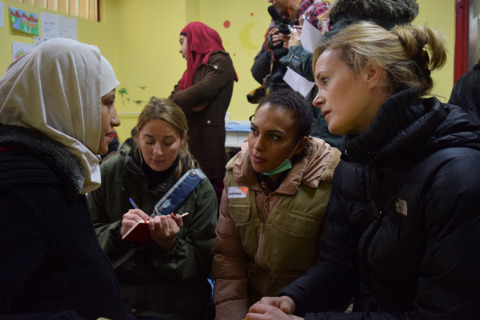 Natasha travelled with us to Serbia in 2015 to see our emergency response work with refugees struggling through Europe. She visited a desolate village close to the border with Croatia, where she helped distribute food packages to refugees on buses and visited our Child Friendly Space that was a safe oasis for mothers and children.

Natasha, who was greatly moved by the people she met, was also interviewed live from Belgrade on Premier Radio during the visit, and again in London.

Natasha was also one of the speakers at our event at the Houses of Parliament marking six years of conflict in Syria. 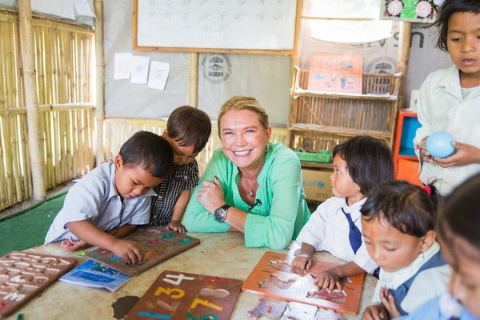 Actress Amanda Redman is best known for her role as Sandra Pullman in the BBC One’s New Tricks.

Amanda has sponsored a child with World Vision since the 1990s. Most recently, in 2015, she travelled with us to Nepal to see our work following the devastating earthquake. Once home she appeared on ITV's This Morning, Loose Women and Aled Jones' Weekend talking about our emergency response efforts in the mountain kingdom.

In 1997, she visited Senegal to meet Diaw, a 10-year old girl she had been sponsoring. The villagers Amanda met were desperate for clean water and she was shocked when mothers told her they were forced to choose between seeing their babies die from dehydration or give them a cup of contaminated water knowing that it would kill them anyway. However, by the time Diaw turned 22, child sponsorship money had paid for boreholes to provide clean water and villagers had been trained to maintain them. Amanda now sponsors another girl, Sophie, who lives in a different part of Senegal.

About Amanda: Amanda Redman is best known for her role as Sandra Pullman in BBC One’s New Tricks. She’s received BAFTA nominations for At Home with the Braithwaites and Tommy Cooper: Not Like That, Like This. Her film roles include For Queen and Country and Sexy Beast. Amanda was appointed a Member of the Order of the British Empire (MBE) in the Queen's Birthday Honours for services to drama and charity. 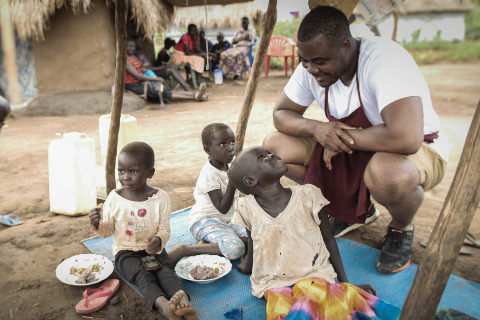 Avid baker Selasi Gbormittah rose to fame when he appeared on our screens in Great British Bake Off 2016.

In August 2017, TV baker Selasi travelled to the refugee settlements in Uganda – including the world’s largest, Bidi Bidi – with World Vision UK, where he met the child refugees who had fled the brutal conflict in neighbouring South Sudan.

“I was so moved by the heartbreaking stories of the child refugees I met - many arrive alone after walking for weeks through the bush. World Vision is doing amazing work to give these kids a better future, but there is so much more that can be done.”

About Selasi: Avid baker Selasi Gbormittah rose to fame when he appeared on our screens in Great British Bake Off 2016. His laid-back approach to baking – and the competition – ensured he was one of the most popular contestants. After successfully launching a pop-up cupcake shop for a brief period, the banker – whose other passion is motorbikes – hopes to open his own a bakery one day. 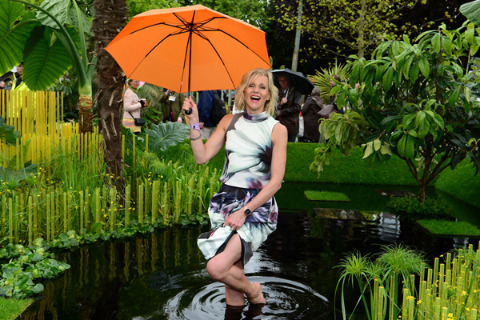 Linda Barker is a TV presenter and interior designer.

Linda travelled to Cambodia in 2015 to see our work. She fronted the #FloralFriday campaign in the same year, designing the scarf that was given away to promote it.  She also organised a fundraising fete in her tiny village in Yorkshire and one of her neighbours wrote and recorded a song (entitled 'Vision for the World') based on our work.

About Linda: Linda Barker began her TV career as a set designer before becoming a presenter of the BBC’s Changing Rooms and House Invaders, later joining ITV’s 60 Minute Makeover design team. Linda came third in the second series of I'm A Celebrity...Get Me Out of Here and third in Splash!, ITV's celebrity diving show. Alongside her TV commitments, Linda has designed and advertised sofas for DFS and is now working with Wren Kitchens on a kitchen and homeware range. 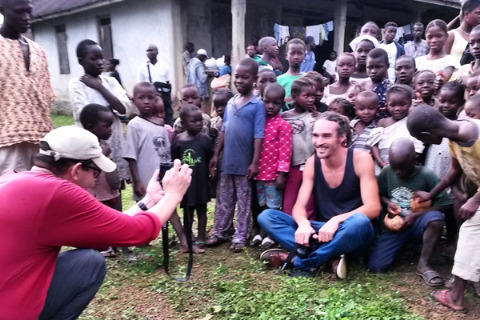 Vlogger Louis Cole travelled with us to Sierra Leone in 2015 to see our work following the Ebola outbreak. He made daily video blogs during the trip that show people struggling to regain their lives in the week that schools had re-opened and the year-long ban on public gatherings had been lifted.

About Louis: Louis Cole is a YouTube personality with over a million followers on Instagram and Twitter. He is best known for posting daily Vlogs on the channel FunForLouis, which documents his life and travel adventures throughout the world. His viewers are familiar with his mantra; "Peace out, enjoy life and live the adventure." 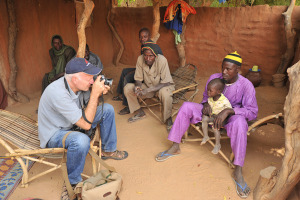 Nick Danziger is a photographer, filmmaker and travel writer.

In 2000, the United Nations set eight Millennium Development Goals (MDGs) to eradicate poverty by 2015. In 2005, Nick visited families and World Vision’s work in eight countries: Niger, Zambia, Uganda, India, Cambodia, Armenia, Honduras and Bolivia. He revisited the families again in 2010 and again in 2015 to document how (or if) their lives had improved.

About Nick: Nick Danziger is a photographer, filmmaker and travel writer. He’s travelled the world taking photographs and making documentary films, with most of his work based on people – especially young people - living in difficult circumstances. His photographs have appeared in newspapers and magazines worldwide, toured museums and galleries internationally, and are held in numerous museum collections. 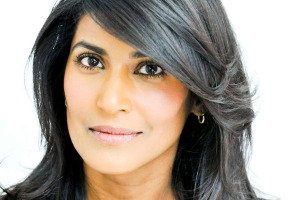 "My own daughter is now an adult and seeing how healthy, lucky and privileged she is has triggered a feeling in me about so many others that aren't so lucky,” she says. “Sponsoring children, such as Lusine, is my small way of being grateful and showing it.”

About Ruby: Ruby Hammer is a renowned makeup artist and has worked with many well-known faces. She is also co-founder of make-up brand Ruby & Millie, and co-founder and director of the Scarlett & Crimson cosmetics brand. 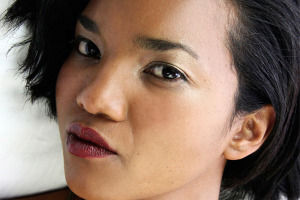 Chipo Chung is a Zimbabwean actress now living in London.

Chipo has recently joined our family of celebrity supporters and is keen to use her influence to advocate for refugees. Chipo was herself born as a refugee in Tanzania, and spent her first two years in refugee camps in Mozambique with others escaping the war in then-Rhodesia. When she was 18 she moved to the US where her mother worked for the United Nations.

About Chipo: Chipo Chung is known in science fiction circles for her work in the BBC's cult series Doctor Who. Her first film credit was as the voice of Icarus II in Danny Boyle's Sunshine. She graduated from the Royal Academy of Dramatic Art (RADA) in 2003 and her repertoire includes political theatre: Talking to Terrorists (Royal Court Theatre), The Overwhelming (Royal National Theatre) and Fallujah (in which she played Condoleezza Rice), as well as classical plays such as Phedre, in which she performed with Helen Mirren (Royal National Theatre), and Epidavros.

Flick through the press clippings below to read more about our Celebrity Supporters in their own words. Mentions of our work are highlighted in yellow throughout.