El Niño's global impact and its effect on children

The 2015-16 El Niño event was one of the worst in decades, affecting 60 million people at its peak, with east Africa, southern Africa, the Pacific Islands, South East Asia and Central America being most affected by the dangerous weather conditions.

The effects of El Niño led to food shortages, more malnourished children, devastated livelihoods and forced families to leave their homes. The changes in weather patterns meant increased outbreaks of waterborne diseases such as cholera and typhoid and vector-borne diseases including malaria and Zika.

The 2016 El Niño has passed, but the devastating effects of both drought and excessive rainfall are still being felt by millions of children and families across the globe. It can take months to recover from the  damage to infrastructure and the loss of property, including livestock. In some agricultural areas it will take one or more successful cropping seasons to replenish food stocks.

Children were particularly vulnerable and suffered from hunger, malnutrition and other illnesses. We've found that in southern Africa, children were dropping out of school due to food and water shortages, migrating, being forced to work and vulnerable to sexual abuse as they're forced out of school.

We'll still be working with affected communities to build resilience and long-lasting change that will stand the test of time long after our El Niño response finishes. 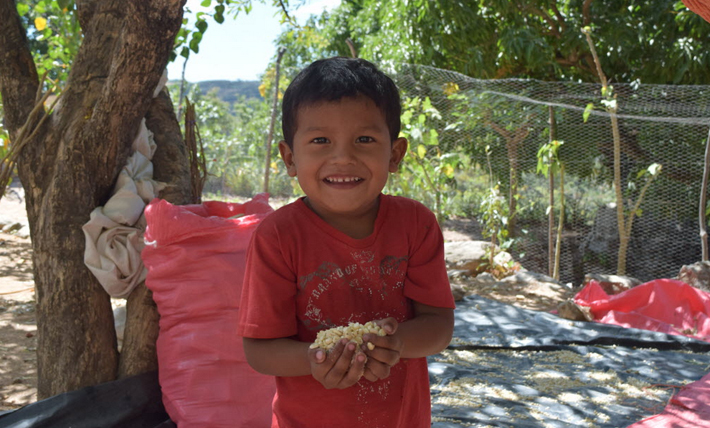 The Dry Corridor countries including El Salvador, Guatemala, Honduras and Nicaragua have experienced the worst drought in decades.

The Dry Corridor countries including El Salvador, Guatemala, Honduras and Nicaragua have experienced the worst drought in decades.

The most vulnerable families with the most urgent needs were small subsistence producers and landless labourers - people who don't have the resources to cope with food insecurity, water scarcity and declining income.

We helped more than 49,000 children in Honduras. In our Comunidades Solidarias ADP we gave out seeds and plants, and trained communities in early warning systems and water conservation. In our Maya ADP we improved access to water and sanitation facilities and strengthend community resilience. 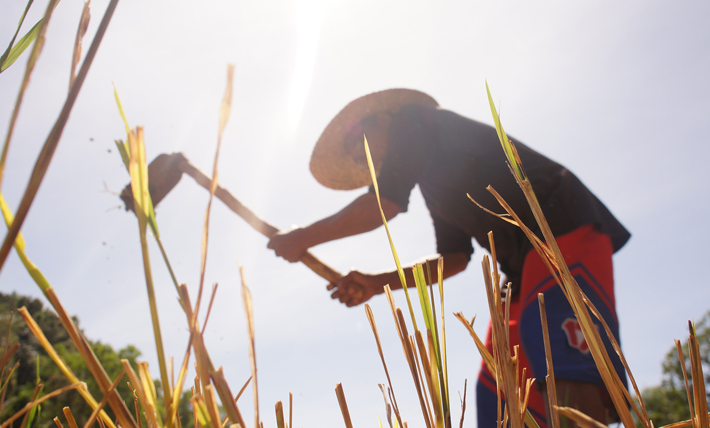 Millions of people in Asia and the Pacific regions have already been affected by heat waves, water shortages and forest fires since mid-2015, and harvests continued to be affected throughout 2016.

Millions of people in Asia and the Pacific regions were affected by heatwaves, water shortages and forest fires.

Our staff across 18 countries in the region reported food shortages due to crop failures and livestock deaths, coupled with dwindling sources of safe drinking water. Most of the hardest-hit communities were already living with malnutrition and widespread poverty, making it difficult for families to withstand the impacts of this slow-onset disaster.

El Niño significantly reduced rainfall and prolonged the dry season in some parts of Indonesia, causing crops to fail and affecting the food security, nutrition and health of around 68,000 families in East Sumba alone.

Families had to buy water at high prices or travel long distances to get water.

Through Start Fund we supported 1,575 families (7,011 people) who were affected by the harvest failure. Cash grants provided a safety net for some families who lost most of their farming income. People have opened bank accounts to support themselves and meet their basic needs. Most people said they used the money to meet their food needs and build up their food stocks. Others have said the money will support their children's education. We also supported communities to develop an Early Warning System (EWS) so that families can be better prepared for future droughts.

El Niño was expected to cause heavy rains in northern and eastern parts of Sri Lanka. In anticipation of floods, we partnered with Start Fund and ran activities in communities we're already working with, to help people prepare for the potential flooding. We also made sure essential relief supplies, including tarpaulins, tin sheets and mosquito nets, were ready at our warehouses in the north and east of the country.

Thankfully, there wasn’t the level of rain predicted, but communities throughout three districts were still affected by severe flooding. We distributed 823 mosquito nets and tin sheets to the most vulnerable families and children affected by this flooding and continue to store essential items to quickly help families in case of any future floods. 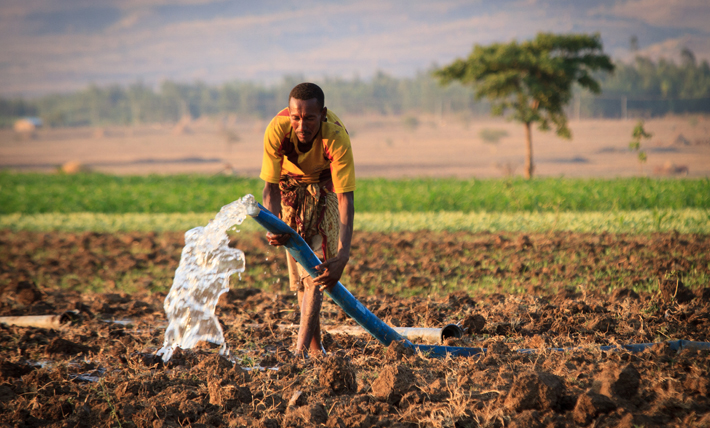 Since September 2015, we've been working with communities to meet vital needs. We're also helping them to be better prepared for future disasters. Eighteen months later, the response has so far benifitted almost 3.5 million people. Our 18-month report has more details ›

Here are some highlights of our El Niño response in the Southern African region:

Through our microfinance arm VisionFund International, we provided recovery loans to help restore the livelihoods of 14,500 families (around 87,000 people)affected by El Niño in Africa.

The Head of Humanitarian and Resilience Team, Mark Bulpitt said: "Recovery lending enables families to get back on their feet. We see tremendous opportunity for microfinance networks to integrate more with humanitarian organisations to help us provide an even more robust response to disasters."

With funding from The UK Department for International Development (DFID), we’ve supported families in Malawi, Kenya and Zambia. The loans helped to rebuild businesses destroyed by flooding and drought, and to restore economic independence to families and local economies as quickly as possible.

It’s been good to see how these loans helped families, even as they faced new difficulties. We will continue work in this exciting new area with these families.

With funding from DFID, working with Care International, we helped over 400,000 people (approx. 73,000 households), who were affected by severe drought in the southern provinces of Zimbabwe. The people in the most need received cash transfers to buy food locally for their families. The project also worked with communities on issues including gender equality; promoting joint budgeting, decision-making on expenditure, and more equal food distribution within families. The programme included the first large-scale humanitarian cash transfer through mobile money to be carried out in Zimbabwe.

In our Sanzukwe ADP we distributed food rations to affected families from the sponsorship programme. We’ve also worked with small-holder and garden farmers to help with better irrigation and water storage, plus using solar power (rather than expensive and dirty diesel). We’ve seen these farmers harvest enough food for their families, plus extra to sell.

Alongside this we’ve seen the very real impact of the work we were already doing with the communities in the area. Our previous support to these communities also helped to bolster household resilience in the face of the El Nino drought and significantly reduced its impact. Families in these long-term projects had enough to eat – and to sell – throughout the crisis. One such farmer is Soneni Moyo. She was able to sell her surplus grain, and purchase 160 goats. Her household was completely food and nutrition secure during the El Nino phenomenon.

According to UNICEF at the peak of El Niño 6 million people in Malawi struggled to get enough food, including 3.6 million children.

El Niño largely affected the southern part of Malawi. Our Kayezi ADP, which is in the north of Malawi, had good harvests and some of the produce was transported to the south to help support families in need. In Kayezi ADP we worked with partners including the Ministry of Agriculture to address the effects of El Niño - partially through winter cropping.

Part of the reason for good harvests was that we helped with fertiliser during winter cropping and rainy season. We also supported communities to store the little maize they had harvested to help food supplies last longer. We also supported farmers with loans for seeds and equipment. Along with the World Food Programme (WFP) and the Government of Malawi, we launched the largest food aid programme ever, to reach over 1 million people.

With funding from the DFID, we worked alongside Food for the Hungry from July 2016, serving drought affected families in two provinces of Mozambique (Tete and Sofala). We provided emergency food assistance, supporting malnourished children, improving access to safe water, and equipping farmers to better cope with erratic climate conditions. Here are some highlights from the project:

Ethiopia's climate has been severely disrupted over the past years, with devastating consequences. Reduced summer rains (which supply much of the country's harvest and drinking water) led to increased food insecurity and malnutrition, and devastated livelihoods across the country.

In August 2015 4.5 million people were in need of humanitarian assistance. By October 2015 this number had almost doubled to 8.2 million and by March 2016 over 10.2 million people needed help.

In three of the worst-affected districts we supplied seeds to the most vulnerable families. Thanks to funding from Start Fund, 9,654 families were able to plant drought-tolerant, early maturing crops including potatoes, maize and beans, with the next successful rains.

We helped more than 2.6 million children and community members in Ethiopia with health and nutrition, water, sanitation and hygiene, and food distributions.

Ethiopia is now facing renewed drought, this time affecting lowland areas in southern and eastern parts of the country, As a result of these new droughts 5.6 million people need humanitarian assistance. We're there, and plan to help 716,000 people with health, water and sanitation, food, education and livelihoods Support, see our East Africa Crisis Update page for more details.

Click here to read about our El Nino response in Ethiopia >>

Lessons we learnt from the El Niño response

The 2015-16 El Niño crisis affected 60 million people – putting it on the same level as the global refugee and displacement crisis – but with nowhere near the same visibility. This kind of crisis is likely to worsen as climate change intersects with the increasing frequency of El Niño-La Niña weather cycles. In response to early signs of a hard-hitting El Niño (warnings were issued as early as May 2015) we decided to pilot a new way to respond early – as a global partnership – to a multi-region crisis. This was, in part, prompted by the failure of the international community to intervene early in the 2011 Horn of Africa famine, in which some 260,000 people died. That crisis proved the importance of early action, disaster risk reduction and resilience interventions. You can read all about the lessons we learnt from this response below:

How you can help

Give now to our general emergency fund to help children and families recovering from the effects of El Niño and help them cope with future disasters.

Give now to our general emergency fund to help children and families recovering from the effects of El Niño and help them cope with future disasters.

World Vision is proud to partner with Start Network and DFID