Jerome met traumatised children last month on a fact-finding trip organised by international charity World Vision. South Sudan is the world’s youngest country, gaining independence in 2011. The East African country has been convulsed by a five-year long civil war which has killed at least 400,000 people. Over 19,000 children have been conscripted into various armed groups.

“Children told me about unimaginable horrors they had seen and experienced,” Jerome says.

“Some children were kidnapped by armed groups and forced to fight and kill and watch other children get killed for not keeping up. Others fled torched homes and villages and sought refuge in camps for displaced people, with little food and no education. Many lost mothers, fathers, brothers and sisters and were forced to make choices no child should have to make, just to survive." 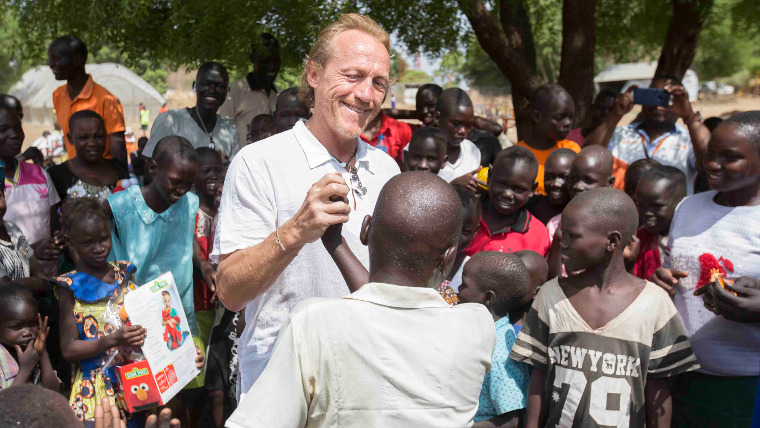 "I met families torn apart because of the conflict and talked to parents who had sons and daughters snatched from them,” he continued. At times I found their stories of what they had to endure almost too painful to bear.

“Yet I also saw hope in a country ripped apart by war. Dedicated World Vision aid workers are helping desperate families stitch their lives together amid the chaos. I was blown away by the resilience of the children, humbled by their spirit, and inspired by their determination to find happiness.

“I saw how war costs children their innocence but does not always destroy their childhoods. The bravery of the children I met will stay with me forever.”

Full-blown conflict is likely to flare up again in South Sudan unless a national army of government and rebel forces is formed by May 12. More children and young people could then be forced into the bush to take up arms or flee the fighting.

Jerome says: “South Sudan’s latest peace deal is on a short fuse and the situation is desperate. Help is needed urgently to protect children from further violence. Sadly, there are thousands of children across the world who need support right now. Please give generously to help them.”

Jerome’s trip forms part of World Vision’s Made for More appeal for funds to protect the world’s most vulnerable children.

Give a donation to Made for More »