What is the Zika Virus?

First identified in Uganda in 1947 the Zika virus is transmitted by the Aedes mosquito. Transmission from mother-to-child and through sexual contact are now believed possible too. Symptoms include mild fever, skin rash, joint pain and conjunctivitis. However, only one in four people who contract the virus experience any symptoms. No treatment or vaccine are currently available.

The Zika virus was first detected in Brazil in May 2015 and spread rapidly throughout the region. On 1 February 2016, the  World Health Organization (WHO) identified the Zika virus outbreak as a public health emergency of international concern.

The greatest concern with Zika is its effect on developing babies. An apparent link to microcephaly,  a congenital condition leading to an abnormally small head, incomplete brain development in newborns and developmental delays. In 2014 Brazil had fewer than 150 cases of microcephaly. In 2016 alone (up to 7 Sept)  there were over 1, 806 confirmed cases of microcephaly and more than 32,905 confirmed cases of Zika in pregnant women in Brazil alone. Of  concern is fact that the Zika virus can be transmitted through sexual intercourse.

This is a very serious crisis, since it has a direct impact on the lives of children and their wellbeing.

We reached over 3.1 million people

As a partnership we worked in 12 of the affected countries in Latin America. In some of the worst-hit areas, including in Brazil, we worked with communities to stop the spread and help families to protect themselves. We supported communities in countries, including Colombia, Guatemala, Honduras and El Salvador. 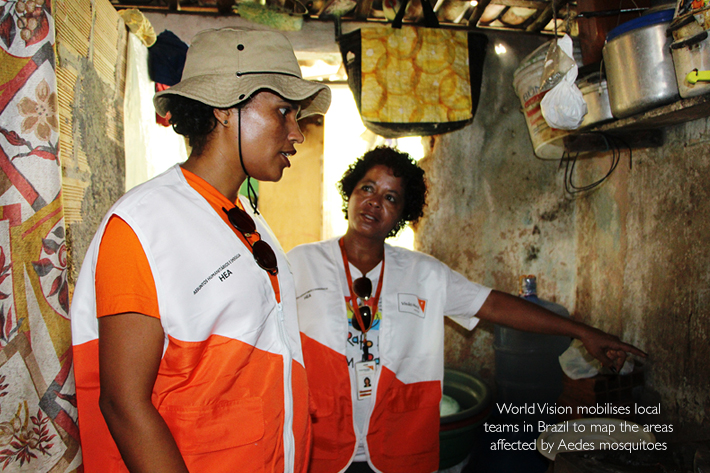 Our teams provided prevention supplies like mosquito nets and repellents. We focused on raising awareness through health education in schools, churches, and government health centres, especially for pregnant women and children, to curb the explosive spread of the virus. We organised clean up campaigns, distributed prevention kits and trained health specialists in psychosocial support for mothers with children affected by microcephaly.

As UK sponsors you supported projects in Honduras. In our Honduras Area Development Programmes (ADPs) Maya and Comunidades Solidarias we gave supplies to schools and communities to clear mosquito breeding grounds. The kits contain a combination of chlorine or bleach, disinfectants, detergents, mops, sponges and rubbish bags. We also supplied pregnant women with mosquito nets, repellent and thiamine tablets to prevent them contracting the Zika virus. There were no confirmed cases of the Zika virus in our ADPs. 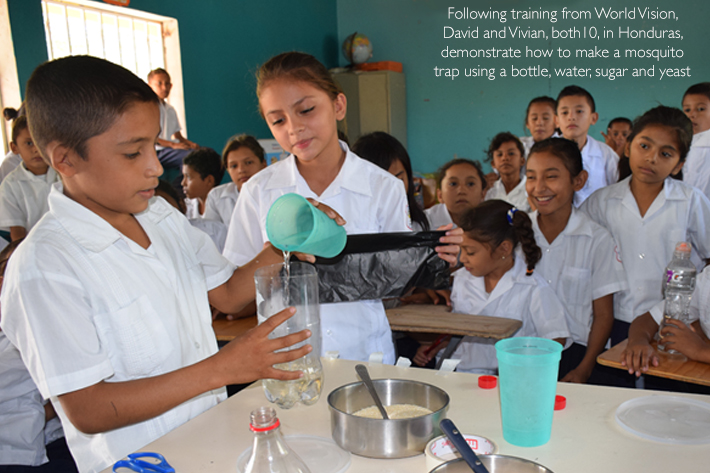 Our emergency response and health teams worked closely with ministries of health and the international community. Our experts drew on successes and lessons learned from the fight against Ebola in West Africa over the past two years. For example, how critical it is to work with local leaders, including religious leaders, to share accurate prevention advice and to dispel rumours or scaremongering, which can enable a virus to spread.

Cases of Zika have reduced in some areas, but it's not over. We'll continue we will continue to raise awareness to prevent and control Zika  through our existing long-term programmes in the region.

How you can help

Our emergency fund can be used straight away in an emergency situation. By giving to the fund you help children and families caught up in an emergency, such as the Zika virus, as soon as it strikes.

Donate to our emergency work

OUR WORK IN LATIN AMERICA

We've been working in Latin America and the Caribbean since 1977.

Currently the World Vision partnership is working with 10,000 communities in 16 countries in the region.