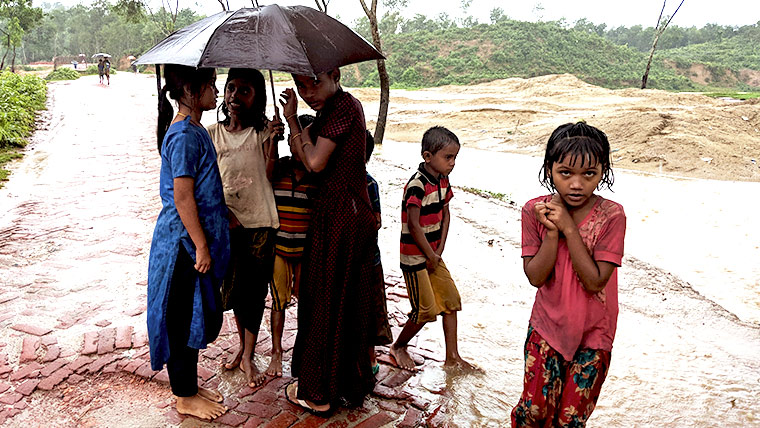 World Vision is delivering life-sustaining aid to hundreds of thousands of children and their families as monsoon rains lash the world’s largest refugee camp.

For the past week, heavy rain has deluged Cox’s Bazar in southern Bangladesh, home to a megacity of one million Rohingya refugees from Myanmar. Meteorologists forecast torrential rain over the next five days that will likely trigger more landslides and flooding in the camps. Refugees living in makeshift shelters perched on crumbling hillsides face increasing risks of their homes collapsing.

We might not be able to outsmart Mother Nature, but we can plan around her. We’ve been gearing up for the monsoon season for six months. Now it’s testing time.

World Vision hired 15,000 refugee men and women last November to help reduce the risk of disaster by reinforcing the camps’ infrastructure. They built a dozen bridges, brick-paved kilometres of road by hand and shored up landslide-prone slopes across the sprawling camps.

Their efforts paid off. Despite hazardous weather conditions, World Vision and other NGOs have been able to access the camps to deliver food aid to the refugees and other much-needed services.

Many roads in the camps are waterlogged and buried deep in mud but we’re getting through and getting the job done.

World Vision continues to provide food to 800 children daily to help prevent and treat malnutrition. The doors of our food assistance shops remain open, where 2,000 refugees come each day to exchange vouchers for fresh fruit and vegetables.

Despite structural water damage, World Vision’s 42 community kitchens are still operating. More than 1,000 mothers count on the kitchens’ gas stoves to cook for their families every morning.

Children are especially vulnerable during the monsoons.

World Vision staff have trained thousands of parents on how to protect their families during extreme weather alerts and what to do if their children are lost or separated during a storm. Eleven World Vision child-friendly spaces will double as community meeting points.