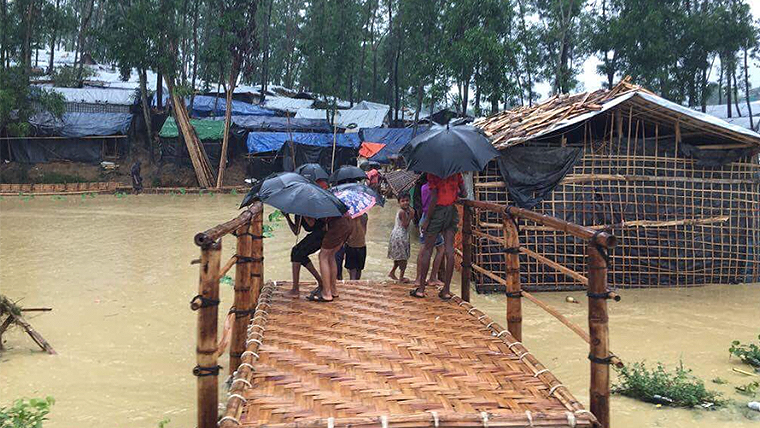 Torrential downpours have triggered flooding and landslides in Cox’s Bazar, Bangladesh, damaging hundreds of refugee shelters and killing at least one young child, according to government reports.

The potential catastrophe that World Vision and other aid agencies have long warned of is beginning to unfold in Cox’s Bazar, as rains lash 883,000 people living in the world’s largest, most densely populated refugee camp. More than 200,000 refugees in the camps face direct danger of their homes collapsing.

In the camps yesterday, I saw children standing next to houses that are teetering on the edge of cliffs and sewage-filled flood waters washing out bridges.

We are really concerned about children as the storms are forecast to continue over the next few days. They are vulnerable to diseases like acute watery diarrhoea that is already rampant in the camps. They also risk being injured or separated from their families during a deluge.

Another two days of heavy rain are predicted for the area, before a temporary break in the weather.

“Unfortunately, the time for major risk mitigation is over and aid agencies are now moving into emergency preparedness,” Tuhaise added. “We are prepositioning supplies to meet the needs of affected families, including tarpaulins, rope and hygiene kits. In partnership with other aid organisations, we are also giving children ID bracelets so they can be quickly reunited with their families if they get lost or separated during the storms.”

For the past few months, World Vision has raced against the clock to help mitigate disaster. To enable families to reinforce their makeshift, dilapidated shelters, World Vision recently distributed upgrade kits (bamboo poles, tarps, rope and tools) to almost 50,000 refugees.

Refugees were also hired through cash-for-work programmes to build bridges, bolster sandbag staircases on the steep hillsides and brick-pave access roads into the camps. However, rain and mud are making roads slippery and impassable for aid delivery trucks.

More than 700,000 people, most of whom identify as Rohingya, have fled Myanmar to neighbouring Bangladesh since August last year after violence erupted in northern Rakhine state. They joined another 200,000 refugees who had already been living in Cox’s Bazar for several years.