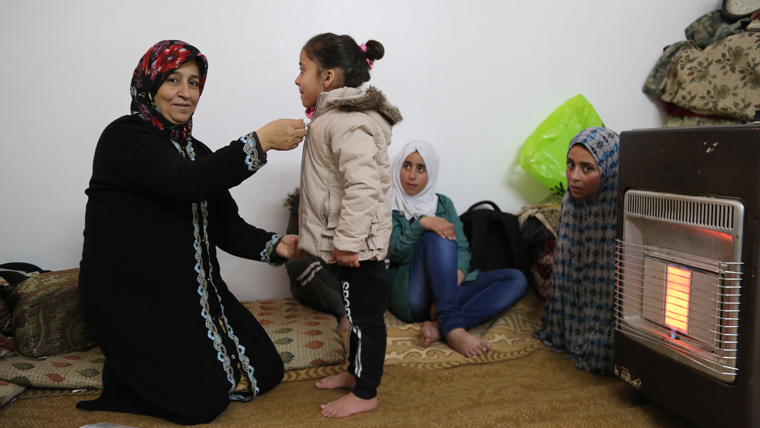 International children’s charity, World Vision, has scaled up efforts to support Syrian families camped out in Lebanon as winter takes hold in the refugee settlements.

Only 36 per cent of the funding requested in 2017 by aid agencies to cover the needs of vulnerable refugees and Lebanese affected by the Syria Crisis was met. Meanwhile, only half of households living at high altitude in tented settlements and substandard shelters are given shelter and food to cope with the cold winter and heavy rain and snow.

Winter is the worst time of the year for refugees, particularly those living in tents. Struggling families now face severe food shortages and rocketing fuel prices.

In the Lebanese settlements, a bitter winter is a battle for survival. Many families can only cope by eating less, selling their goods and keeping children out of school.

So far, World Vision has distributed food parcels and other relief items to 32,000 refugee households. It has also constructed water networks in the Bekaa Valley and in Akkar, North Lebanon to provide refugees living in over 250 informal tented settlements with water.

Syrian refugees in Lebanon are also more vulnerable than ever, with more than half (58 per cent) currently living on less than US $87 per month while 120,000 families are left without any winter support. For the most vulnerable children, this is a matter of life or death.

Sarah Pickwick, World Vision UK's Senior Conflict Adviser said: "Syrian refugees in Lebanon are more vulnerable than ever. It is difficult to comprehend the levels of poverty these families face – most have to survive on around £2 a day. Nine in ten refugees are now in debt and drifting into even deeper poverty.

"The Syrian conflict no longer attracts as much public attention. But the war is far from over and life in the settlements is as bad as ever. We urge the international community not to turn their eyes away from this crisis and to honour the US $6 billion pledged to support refugees," she added.

International aid agency, World Vision, has appealed to donors for US$10 million in additional funding, as it launched its humanitarian response to the crisis in the conflict-affected Tigray region of Ethiopia.
Give