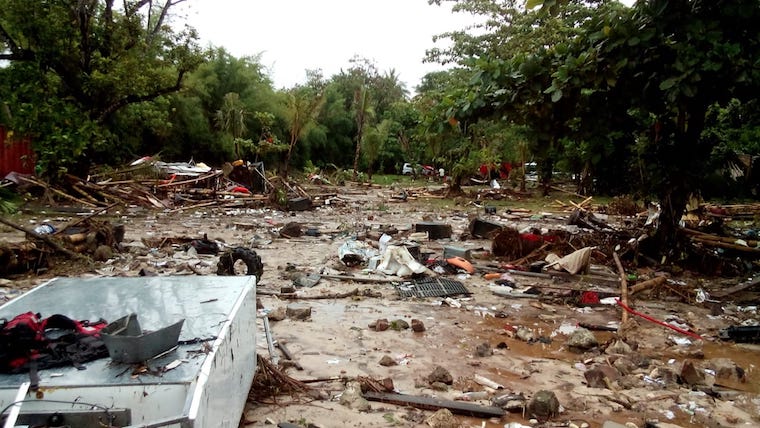 The death toll is expected to rise, and over 1,000 people were injured at last count. Thousands have been forced to flee their homes.

The appeal launched today will help World Vision scale up its response to the disaster.

The tsunami has been absolutely devastating – and a real tragedy for a country that is already reeling from three major natural disasters in the last four months.

Families are suffering, and we are deeply concerned about the impact of this disaster on children who can be deeply distressed by losing loved ones, homes, schools and their sense of trust in everything around them.

The generosity of the UK public in responding to our appeal will help us reach people desperately in need.

The tsunami struck the Sunda Strait and the islands of Java and Sumatra at around 9.20pm local time on Saturday. An underwater landslide following the eruption of the Mount Anak Krakatou volcano is thought to have caused the disaster.

World Vision immediately deployed a rapid response team to the devastated site who are currently assessing the damage and most urgent needs.

Bevita Dwi, Head of Emergency Affairs at Wahana Visi Indonesia, said: “This is a devastating and deadly tragedy. We are desperately concerned for the lives of those injured and missing, and for the hundreds of families who have lost loved ones.

“Hundreds of homes and other buildings have been destroyed, forcing thousands of people to flee for their lives. As ever, children are likely to bear the brunt of this crisis.

“World Vision staff are on the ground to assess the extent of the damage, and offer life-saving help as needed.”

An earthquake triggered a tsunami just three months ago in Indonesia, killing more than 2,000 people and injuring over 10,000.

To donate to the Indonesia Christmas Appeal, click here.