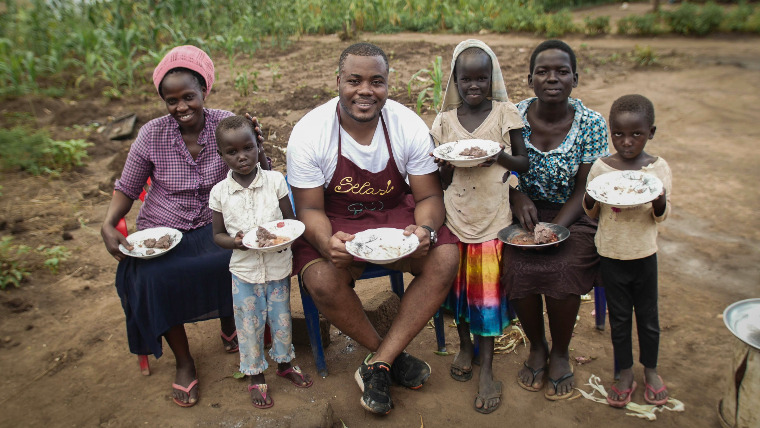 Star baker, Selasi – who recently visited the desperate children and families living in Uganda in Bidi Bidi, the world’s largest refugee settlement – is asking people to share a meal with friends and family and donate together to support World Vision’s work with the world’s vulnerable children.

It’s heartbreaking to see pain and hunger etched onto the faces of orphaned children and hear their harrowing stories of rape and violence. It is vital that, as a community, we come together to do what we can to help provide these kids with a better future.

Hundreds of thousands of children are streaming into Uganda’s refugee settlements from a brutal civil war in neighbouring South Sudan. Many flee after seeing their parents murdered and walk for days or weeks without food or shelter. They hide in the bush during the day, moving at night to avoid being killed by fighting parties. They arrive at the border alone, traumatised and hungry.

World Vision is helping to feed children in the refugee settlements, find them foster families and give them a new start. However, global funding to tackle the humanitarian crisis is nowhere near enough and food supplies are running out. Children survive – just - for months on meagre rations of beans and flour. Far more must be done.

Tim Pilkington, World Vision UK CEO added: “World Vision UK feels strongly that we can’t stand by while children in Uganda go hungry or fail to grow because they don’t have enough good food. We are confident that through Share A Meal, we can help some of the world’s most vulnerable children.”

Share A Meal launched on Sunday 17 September. To find out more, visit worldvision.org.uk/shareameal »

MPs and policy experts will tomorrow (Tuesday 4 August, 5.30pm) discuss the future of UK aid ahead of the merger of the FCO and DFID.
Share A Meal - help children affected by hunger