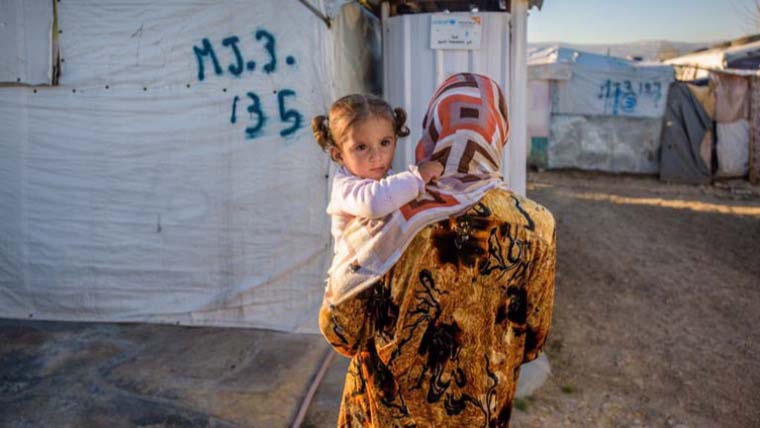 A Syrian family in the Bekaa Valley refugee settlements in Lebanon.

Staff on the ground in Lebanon are worried about the safety of refugee children and their families as the number of fatal fires and accidents continues to rise.

“Fatal fires in refugee settlements are commonplace. These makeshift tents were never made as a permanent and safe environment to live in. The latest tragedies are no surprise to anyone who works with Syrian refugee communities.”

“Fire safety is a huge issue, as many refugees are living in unsecured and fragile shelter in informal settlements, or in sub-standard shelter in host communities. We need a peaceful solution to the war in Syria and a dignified return for the millions of refugees whose lives have stagnated over the last six years,’ she continued.

“Children living in these refugee settlements have already gone through hell, they have lost homes, friends, family members and witnessed or experienced violence. The fire incidents only exacerbate their physical and psychosocial situation,” said Mouamar.

World Vision staff on the ground responded to the fire in the Bar Elias settlement at 2:00 am on Tuesday, 04 July. A six year old girl died and six other people were wounded. And, 20 out of a total of 130 tents were destroyed in the blaze.

Takak Oudada, World Vision’s Water and Hygiene Progamme Assistant, was told by survivors that, “People ran for their lives, they fled with nothing: no ID/papers, no money, no clothes: nothing. The little they had was destroyed.”

World Vision fears that refugees who lost their ID papers in the fire will not be able to access vital services. “Without documents refugees are powerless,” said Patricia Mouamar.

“Undocumented refugees are unable to move freely for fear of being arrested with ID,” she continued. UN agencies are rushing to re-issue papers as quickly as possible but there is an inevitable time-lag.

World Vision Lebanon staff responded to both of the fatal fires that have killed two children in the last four days. When staff arrived at the settlements they extinguished the fires, consoled the survivors; and distributed water tanks, water bottles, soap and much needed dried food.

Oudada, who lives 10 minutes from Qab Elias refugee settlement, rushed to the settlement on Sunday morning when flames and smoke filled the skies above his home. “I have worked in the Bekaa Valley area since 2012. I have visited these families three or four times week for years - I had to do something to help,” he said.

Khalil Douhan, the uncle of baby Kaled who died in the blaze on Monday said, “We tried to control the fire and stop it reaching farmland, but the tents are made of flammable plastic. It was impossible to stop it. The tents caught alight one after another, within 15 minutes the fire had destroyed our homes.”

“Now more than ever we need the Astana peace talks to deliver a solution that allows Syrian families to resume their lives. If we don’t, more children will die from living in underfunded, inadequate tented cities that were only ever meant to be a short-term solution," said Mouamar.

Lebanon now hosts the most refugees per capita in the world, and is suffering under the weight of such a drastic population increase.

World leaders must do more to end the violence in Syria.

The abolition of DFID is a political move, and the world’s most vulnerable people will pay the highest price.
Syria Crisis Appeal