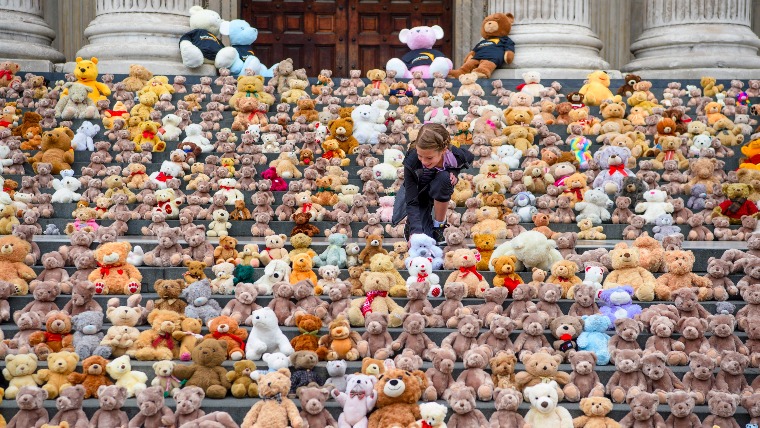 700 teddy bears were placed on the steps of London's St Paul's Cathedral as part of a campaign by the international children's charity World Vision to highlight the plight of child refugees.

The bears represent the around 700 unaccompanied, separated and at risk children fleeing conflict in South Sudan by crossing the border into Uganda each week. The stunt highlights the growing refugee crisis in Uganda where nearly a million South Sudanese people have taken refuge in settlements in the north of the country.

This is a massively unreported situation. In a gentle way, we’re trying to highlight something that is incredibly serious. Bidi Bidi is the largest refugee settlement camp in the world today, and people don’t know that. There are 700 unaccompanied and at risk children arriving across the border every single week, and we must help those children have brighter futures.

Support has come from the Game of Thrones actor Liam Cunningham who recently visited Uganda with World Vision. He added:

I have watched the war weary and hungry from South Sudan arrive into a welcoming Uganda. They are images I won't soon forget. I urge the international community to move quickly to share responsibility for this crisis. Those that say it's not our problem, are the problem.

Psychologists and child welfare experts working in the Imvepi and Bidi Bidi refugee settlements of Uganda say nearly all children arriving in the country require psychosocial first aid. Most have suffered and witnessed terrible brutality as the civil war intensifies in South Sudan. A staggering 60 per cent need urgent specialist therapy to treat the effects of conflict-related stress disorders.