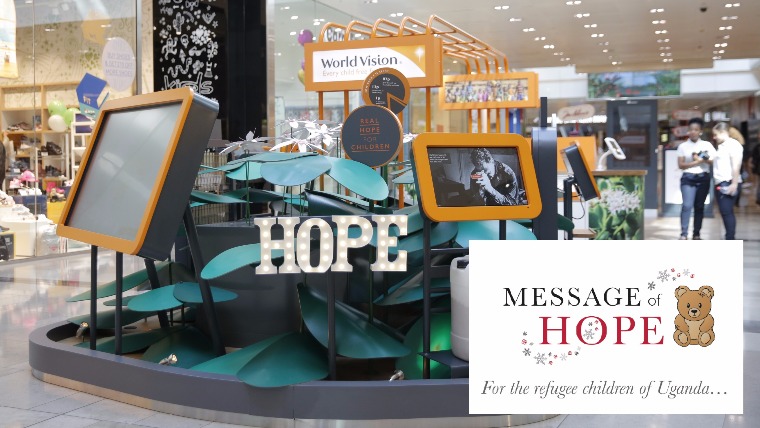 Children’s charity World Vision is asking shoppers to stop at its stall in Stratford and send a message of hope to child refugees in Uganda.

The international charity has put a pop-up post-box into its unique ‘Garden of Hope’ experience in the Westfield Stratford City shopping mall. Staff will hand out message cards for passers-by to drop in the box and pass on a Christmas wish to children who have lost everything. The first 150 well-wishers will get a friendship bracelet to celebrate their warmth of spirit.

Every week hundreds of terrified children flee a brutal civil raging in South Sudan. Some walk for weeks to seek refuge in the world’s largest refugee camps in neighbouring Uganda. After witnessing terrible atrocities, many arrive alone, sick or separated from their parents.

World Vision recently brought joy to some of the child refugees when the charity delivered 700 teddy bears to the refugee settlements in time for Christmas. Visitors to the shopping mall can view pictures of the heart-warming moment on display at the Garden of Hope.

We work with refugee children in Uganda who are forgotten by the world. The children come to us with absolutely nothing. Many will spend Christmas without a single toy to play with.

It takes only a few moments to post a message of hope for these children. But these are precious moments for a child who has lost everything. To find out that there are people who wish you well can make the difference between despair and hope. To discover that you have the support of others can give you the strength to carry on.

Staff at World Vision’s Garden of Hope will collect shoppers’ messages of hope throughout the Christmas season and deliver them to refugee children in Uganda in the New Year.

World Vision will display the messages in 31 children’s centres in three settlements. The centres provide children with a safe place to play and a basic education. They engage in peace-building activities, steadily recover from distress and start to feel normal again.