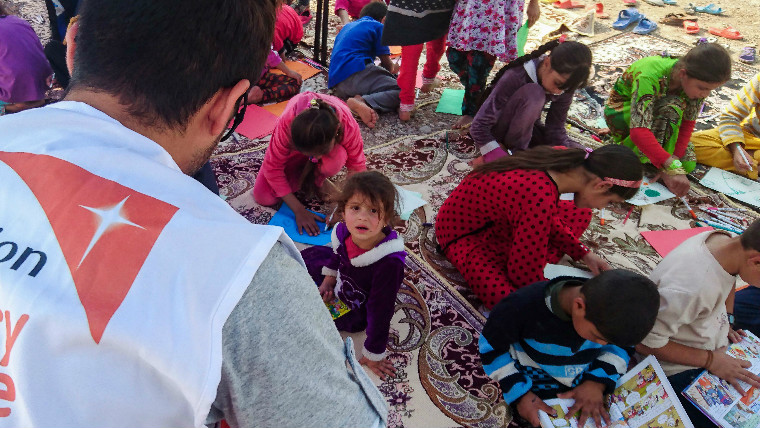 Children fleeing Mosul are arriving at camps petrified, struggling to express themselves, and in some cases too terrified to speak, say World Vision staff based just outside of the city.

Aaron Moore, World Vision’s Programs Manager in northern Iraq, said: “We are working with children who have arrived from Mosul in the last few days that are showing the crushing impact of being trapped in a city that was taken over two years ago.

“Many children have been stuck in their homes while bombings, sniper fire or chaos rules around them. Others have witnessed the death of family members. One little boy who is five years old arrived at the camp too terrified to speak. He saw his 15-year-old brother killed while they fled ISIL. He was not mixing with the other children - he was simply staring at them.”

Two years living under ISIL occupation and facing a litany of dangers while fleeing, such as landmines, snipers and fighters, has taken a toll on children’s physical and mental health.

Moore explained: “Thankfully, with the support of a trained World Vision psychologist, he was able to say his name by the end of the day. However this is just the beginning of what could be years of specialist support, as children begin to rebuild their lives and regain a sense of normality.”

The children’s charity has been setting up ‘Child Friendly Spaces’ in northern Iraq as part of its emergency response work to the Mosul conflict. The spaces act as safe places where children can find some normality in the chaos and receive psychological support, including taking part in activities like painting, sports and games.

“In the camps, many children don’t want to play,” Mr Moore continued. “When painting, they have been recreating war scenes with tanks and war planes.

“However after a few days at the Child Friendly Space with our staff, they’re beginning to slowly regain confidence and a sense of hope for the future,” he added.

More than 20,000 people have been internally displaced after fleeing Mosul since the 17th of October, many of them seeking safety in camps.

As the conflict intensifies, the charity urges that safe passage out of Mosul and other affected areas for civilians must be put in place. Humane treatment by all parties at every stage of the Mosul operation must be a priority.

Up to 700,000 people could leave the city, which has been occupied since June 2014. World Vision has been working around the clock to prepare for their needs, including providing food and clean water.

You can help World Vision’s efforts to support vulnerable refugees across the Middle East by making a donation to the Refugee Appeal today.