World Vision UK has backed calls for Britain to accept 3,000 unaccompanied children who have fled the Syria Crisis, and are now heading through Europe. 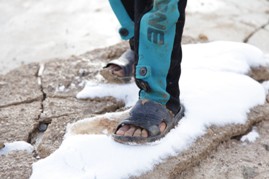 The UK International Development Committee says the action is required on top of an existing government commitment to take in 20,000 refugees from countries surrounding Syria over the next five years.

Gavin Crowden, World  Vision UK’s Head of Policy and Public Affairs, said: “Our staff in Serbia are helping  children every day who have been through unimaginable horrors, and the strain of walking for weeks to reach somewhere safe.

“The fact that we’re seeing so many children on their own, separated from their parents, is worrying and makes them so vulnerable as temperatures dip well below freezing.

“The UK Government’s already a world leader in responding to the Syria Crisis. But this conflict has been raging for nearly half a decade and shows little sign of let up.

“In Serbia we planned to help 100,000 refugees in six months – but we’ve reached that number in just three months. These are exceptional times and children’s lives are at stake.”

World Vision has been responding to the Syria Crisis in Syria itself, and in the neighbouring countries of Lebanon, Jordan, Turkey and Iraq. Details of our work: https://www.worldvision.org.uk/our-work/emergency-response/syria-crisis-update