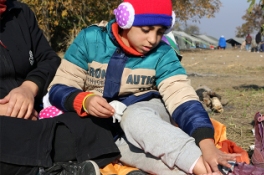 Of the one million refugees that have made the treacherous journey to Europe to date, official figures indicate that a third of these have been children.

World Vision’s Director of Advocacy, Deirdre de Burca, said: “Already some 500 children have lost their lives at sea. 2015 will be remembered for the heart-breaking image of Alan Kurdi’s lifeless body on a Turkish beach as a catalyst. This image confirmed to the world that this crisis is a children’s crisis.

“Countless more children have lost loved ones, left homes and communities. They have suffered terrifying boat crossings and unpredictable border closures. They continue to be deprived of a normal life and of the rights they should enjoy, such as an education, a home and warmth of a family and time for leisure and play. Many of them suffer post-traumatic stress disorder when arriving at their destination in Europe and do not receive adequate treatment”.

World Vision is joining with other experts today (Friday 15th January) in Palermo, Sicily, in an expert roundtable on the need to protect refugee and migrant children arriving in the EU. This Roundtable has been co-organised by the Child Rights Inter-Group of the European Parliament and UNICEF, and will include representatives from relevant EU institutions such as Frontex, UNHCR, the Greek and Italian National Ministries and other child-focused NGOs.

“The aim of this event is to bring the issue of the protection needs of children in the context of the EU refugee crisis to the very top of the EU’s agenda,” says de Burca.

“It will identify critical challenges and risks for children arriving in the EU– both for children coming with and without their parents. It will also launch a ‘Palermo Call for Children’ for the protection of the rights of refugees and migrant children in this current crisis. Finally it will explore concrete actions for follow up as a part of upcoming legislative packages to be adopted as part of the EU Agenda on Migration”.

The organisation believes that the “Palermo Call for Children” will represent an important set of guidelines for the EU and Member States to assist them in ensuring the full protection of vulnerable children arriving in Europe.