Cyclone Pam has not only wrought unprecedented damage in Vanuatu but also lent urgency to World Vision’s calls for leaders gathered at the World Conference for Disaster Risk Reduction in Sendai, Japan to prioritise the needs of children when tackling disaster risks. 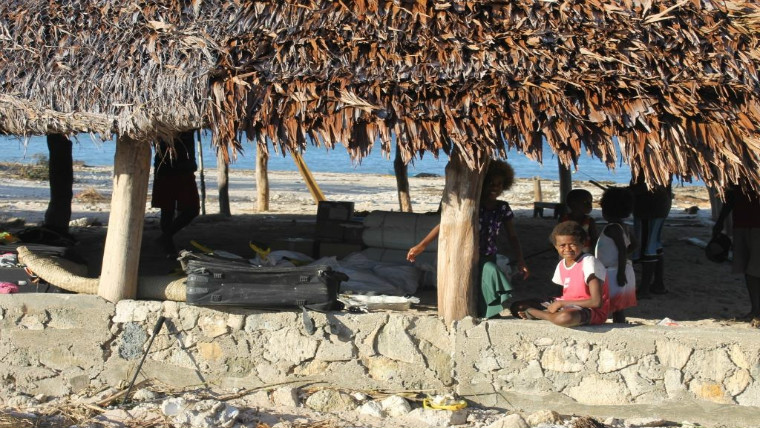 After cyclone pam destroyoed their homes, children like Agnes are sleeping in exposed huts.

Emergency shelter and logistics staff deployed by World Vision are among those who arrived on the island of Tanna in Vanuatu on Tuesday as part of an international mobilisation of aid workers to assist the cyclone hit nation.

They join hard-pressed country-based team members who are struggling to respond to the needs of survivors following Cyclone Pam. The 270km per hour cyclone disrupted power, water, telecommunications and damaged buildings – 24 people have been reported killed and 3,300 displaced.

Meanwhile, World Vision’s director of disaster risk reduction, Richard Rumsey, who is in Sendai, said the cyclone must serve as a wake-up call of the critical need to build resilience against natural disasters; and in particular to prioritise the needs of children.

“The loss of life and destruction wrought by Cyclone Pam underscores a simple but significant point. The threats posed by disasters are on the rise, and it’s children who are disproportionately affected when disasters happen,” said Rumsey.

“Leaders gathered in Sendai for the World Conference on Disaster Risk Reduction must not let Cyclone Pam’s calamitous lesson go to waste. Instead, it should galvanize action to ensure children’s unique needs and perspectives are included in disaster risk reduction planning.”

World Vision Vanuatu country director Michael Wolfe echoed those concerns: “We are deeply worried about how communities, and especially children, have been impacted by this cyclone.

“The cyclone hit all of the islands, many of which are remote, low lying and extremely vulnerable. Experience tells us children are especially at risk to sea surges and the secondary impacts of a cyclone, including water source corruption by seawater, hunger following crop devastation and trauma – both physical and psychological.”

World Vision said initial surveys have been carried out in Vanuatu’s capital Port Vila area. Such was the devastation that aid agencies fear the worst for other remote inhabited islands among the 82 in the island chain where people chiefly live in thatched homes with few solid buildings to evacuate to.

Relief goods such as tarpaulins, tools for repairs, water containers, mosquito nets, hygiene kits, baby kits, and kitchen sets were already positioned on some of those islands by World Vision in readiness for such an emergency.

Thirty seven evacuation centres have been established in Torba and Penama provinces and the main island of Efate. World Vision aid supplies based in Brisbane were due to be flown in to Vanuatu on Wednesday once an air corridor has been established.

World Vision has already launched an appeal for donations in a number of the countries where it is based.