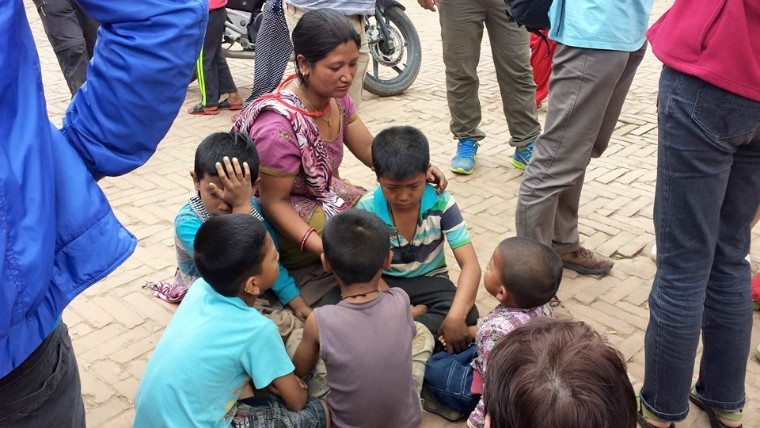 Today, World Vision teams began coordinating aid efforts to assist those impacted by the 7.8 magnitude quake that struck Nepal, even as staff got their first look at the damage in some rural areas. This after many spent the night in tents, keeping out of damaged buildings as aftershocks continued through the night.
“My family and I slept out in the open last night in a field with our neighbors. Our street is completely blocked off with rubble. We were still feeling a lot of aftershocks, every few hours. Everyone was very afraid. Some people are in shock. But as morning began in Kathmandu, we also saw people walking around to see what the damage is, to get a better idea of what happened and to gather supplies,” said Phillip Ewert, World Vision’s Operations Director in Nepal.
World Vision has sent a team to assess the damage in rural areas. They anticipate several hours journey first by vehicle, then by foot, a trek that will take more than half the day, despite a distance of just 50 miles.
In Kathmandu, staffers describe roads blocked by debris and older buildings toppled. Those modern buildings that remain standing are still uninhabited, with people unsure whether the structure is safe. Few stores are open and there are limited places to get supplies.
“There was a real sense of community, people cooking for each other. But it’s also clear supplies are running out. It’s not at the panic stage yet, but it’s starting to get that way,” Ewert said.
Despite being in a highly earthquake prone region, many villages and towns in Nepal are simply not prepared for earthquakes of this magnitude, says Matt Darvas, a World Vision employee based in Nepal:
“Villages in the areas affected near the epicentre are literally perched on the sides of large mountain faces and are made from simple stone and rock construction. Many of these villages are only accessible by 4WD and then foot, with some villages hours and even entire days walks away from main roads at the best of times. It will likely be helicopter access only for these remote villages,”Darvas said.
Reports of damage are starting to come in from these areas.
“Villages like this are routinely affected by landslides and it’s not uncommon for entire villages of 200, 300, up to 1000 people to be completely ‘buried’ by rock falls. We are slowly hearing reports that this may have been the case in villages in the Kaski and Gorkha regions,” says Darvas.
“Delivery of medical assistance will also be a challenge. Health posts are often rudimentary in the village districts with limited services, and are not even always staffed by a registered doctor. Some villages rely on being able to access the health posts of surrounding villages. If they are ‘cut off’, it’s possible that entire villages are without medical assistance right now,”Darvas said.
World Vision is planning to respond in its initial phase to 50,000 people, meeting their immediate needs including providing first aid kits, sleeping mats, blankets and jerry cans; temporary shelter; and protection for children.World Vision is setting up three Child Friendly Spaces so children have a safe space to play following the trauma of the quake.
Disaster management experts from World Vision’s operations around the region – including in neighboring India and Bangladesh - are on standby to provide relief assistance to the Nepal response. Some supplies were pre-positioned in Nepal, while others will be airlifted in from Dubai.
Nepal has long ranked at the top of the list of places most vulnerable to earthquakes, according to experts. Before the earthquake, World Vision had identified Nepal as “very vulnerable” to earthquakes, and the aid agency had been implementing earthquake preparedness training for communities and workshops for schools to help reduce the risks of earthquakes. This work was done in Lalitpur and Rupandehi Districts for about 65,000 people.
World Vision has launched an emergency appeal to help children and families affected by the Nepal Earthquake.
For media queries and interview, please ring 07956593111.