In Bangladesh's refugee camps, childhoods are being lost 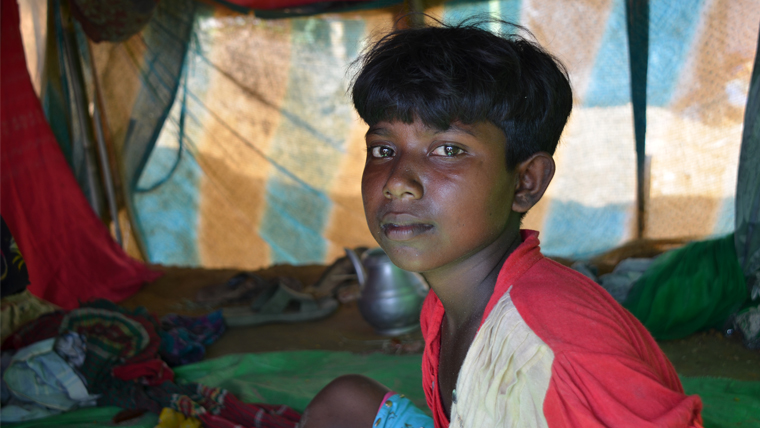 “In my dreams I see people running, crying, shouting and fighting and suddenly I get up in fear,” says 11-year old Somsida, a child refugee who fled violence in Myanmar. She currently lives in a refugee camp in Bangladesh with her family.

Somsida’s two uncles were killed in the violence that erupted in Rakhine state, Myanmar over a month ago.

Her mother, 30-year-old Rabban, is concerned for the wellbeing of her children, as they are unable to forget the incident and erase it from their minds.

"Sometimes at night Somsida gets up recalling the incident. Our people were killed and house after house burnt. We managed to flee when Somsida’s uncles were killed. But from the place we were hiding, nearby, we saw everything. My children and I were very afraid to return. What if we are next?," Rabban says.

“When we were fleeing, I cried because I heard the sounds of firing, people shouting and crying which scared me,” says Somsida.

The journey that followed wasn’t easy. The children cried profusely, but the family had to keep moving.

"We walked for miles before we reached Bangladesh. Leaving our village behind was very painful, with no food, water and walking in the rain with a five-month-old baby and seven children was an ordeal. But now I feel safe and I know we will not be killed here," says Rabban.

After Arrival at the Refugee Camp | What Lies Ahead

Although now relatively safe in Bangladesh, Somsida doesn't have any nutritious food to eat. “In my house I used to eat rice and fish. I like it. I used to eat different kinds of fish like Bowal, Pangas, Guichcha, Maitta. Among them the most favourite is Maitta fish, because it has less bones but it tastes delicious. It has been a month since I have eaten rice and fish. We can only afford to eat Chira (Flatten rice) and Gur (sugar). We eat the same thing everyday," she says.

Sadly, sanitary conditions in the camps are also dire, and access to clean water is limited. Somsida feels unsafe when she has to go to the jungle to use the toilet. “It’s a long walk to the jungle. Like me, many girl children go there. It is in the open so everyone can see and that makes me feel shy. I also fear the snakes and Jok (leeches). Some men who pass by throw mud at us to harass and humiliate us. In the jungle where we defecate it smells bad there and sometimes it sticks on my legs too. It feels uncomfortable.”

No Play and No School

At the campsite there is no place to play with other children.

“I wish I could play again like in my village, but I cannot. There is no playground and no friends whom I can play with. Back in my village I had many friends, I miss all the games here. Now I just roam around in the camp,”  Somsida says.

She misses going to school and wishes she could start learning again.

“I want to be a teacher in the future. I like to go to school. If the fighting stops, I wish to go to my village and start school again and attend classes," she says.

Our teams are already on the ground in Bangladesh reaching some of the most vulnerable families. Please donate to help those in need through our Myanmar Refugee appeal.