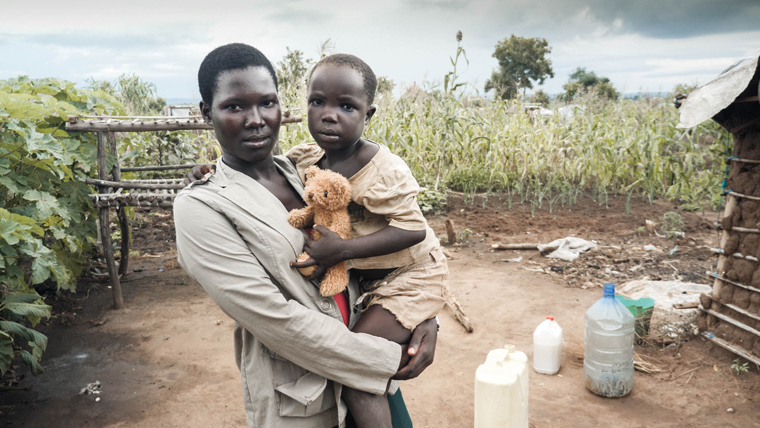 A South Sudanese refugee explains how she is making a life for herself (and her sisters) in Uganda...

Eva has just rushed from school when we arrive at the small mud hut she calls home. Immediately she busies herself making a fire so that she can boil water to give her younger sister a bath. This young woman, barely 16, is the sole carer for her two younger sisters: Mary, 12 and Leyla, 5.The three sisters have made a home for themselves in northern Uganda in Bidi Bidi, the world’s largest refugee settlement, since fleeing civil war in South Sudan last year. They were forced to run for their lives and saw things no-one - let alone a young child - should witness.

“We were on our way home from school when we heard gunshots,” Eva tells us. “ I was very frightened. We headed for the farm where my father was working in the fields but as we got nearer we heard more fighting and saw dead bodies lying in the road.”

The sisters found themselves caught up in crowds of terrified villagers running in the opposite direction. In the turmoil, Eva bumped into her neighbours, who told them to turn around and run in the direction they’d just come.

“I had to make a quick decision” explains Eva. “ My mother had gone to collect vegetables so was with my father but it was 25km away. It was chaos. I had to think of keeping my sisters safe, so we just ran.”

For the next three days the girls walked towards Uganda. “I had to carry Leyla for most of it,” says Eva. “ Our neighbours had some fruit and dry porridge that they shared with us, but we were very hungry.”

She explains that when they eventually made it across the border to Bidi Bidi, she felt relief but it also hit home that they might never see their parents again. And they are unlikely to discover what has happened to them.

“I was relieved but also very, very tired,” she says. “I didn’t know where my parents were or if they were still alive, and for the next few days I couldn’t think properly. What kept me going was wanting to make sure my sisters were ok.”

Initially, World Vision staff ensured that the girls were safe and enrolled them in sessions at a Child Friendly Space where they could play and have lessons. They now attend government schools.

“World Vision staff make sure we receive our monthly rations but it is hard to survive,” Eva says. “We have to grind the grain before we can eat it so we have to use some of it to pay the people who have the grinding machines to do that for us.”

She also worries about the monotony of the food.  “Leyla sometimes refuses to eat, as she doesn’t want the same thing all the time. So I swapped some grain for seeds and have been able to grow eggplant in the space in front of my home.”

The girls often survive on just one meal a day. “It is hard to study when I feel hungry but I want to become a nurse and get a good job,” says Eva.  “I want to help sisters: I want them to be in school so we can have a better future.”