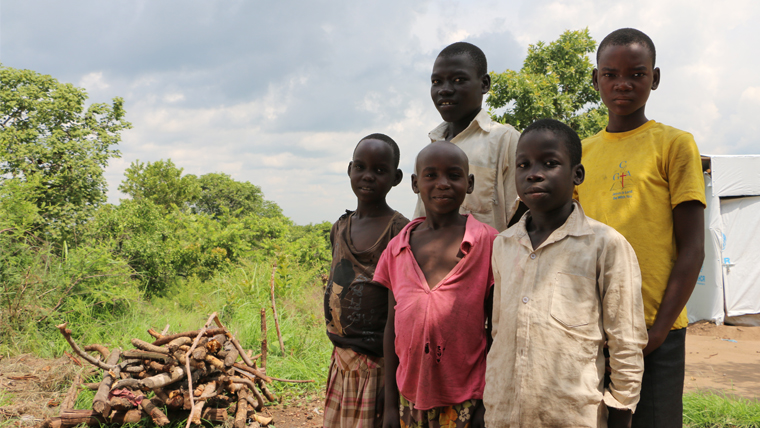 Ben and his wife Beatrice were forced to flee Juba, the capital of South Sudan, with their six children when fighting broke out last year. They now live in the Imvepi refugee settlement in northern Uganda, alongside 125,000 other South Sudanese refugees.

“When war broke out in South Sudan, no one expected it to happen. It is so painful,” Ben says. His home country is the youngest and one of the most fragile states in the world. Civil war has raged for years, during which hundreds of thousands of people have been killed. And as is often the case in conflict, innocent children bear the brunt of the brutality.

Uganda’s refugee settlements now provide sanctuary to more than half a million boys and girls who have fled from the horrors of South Sudan. Around 100 more terrified children arrive every day. They arrive with stories of murdered parents, emptied villages and lost loved ones and often with no adult relatives to turn to for help.

Families like Ben’s are making a huge difference. Though he and his wife have six of their own children to care for, they’ve become foster parents to five other refugee children who came to Uganda alone after their parents were killed.

Nadal*, 16, Rachael, 14, Talia, 12, Lamya, 10, and Isaac, 8, were on their way home from school for lunch as usual last year, but when they reached their house all that was left was rubble. It had been hit by a bomb, and their parents were inside.

Nadal knew there was no hope they were still alive, and afraid more bombs would come he took his brothers and sisters and fled. “People were running away, so we ran with them,” he says. They had no time to try and salvage any belongings from the ruins of their home – they ran with only the clothes on their backs.

They kept going for three weeks. With no adults to take care of them, the responsibility fell to Nadal. Other families also fleeing sometimes gave them food when they could, but the children often went days without eating. The legs of two of Nadal’s sisters became so swollen from being constantly on the move that they could no longer walk. Nadal had to take turns carrying them on his shoulders. “At that point I felt responsible – there was no way I could leave my siblings, it made me want to keep us all together,” he says.

Things took a turn for the better when they found Ben and his wife, Beatrice – friends of their parents who had also fled Juba. 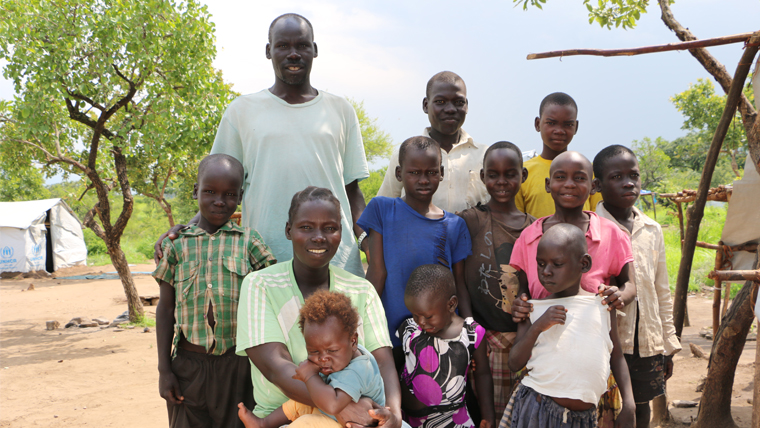 Ben and Beatrice took the children in, and travelled with them until they reached the safety of Uganda. It was a very dangerous journey – they moved at night and hid in the bush during the day, terrified of being ambushed by rebels. “It was so hard. You would meet people in the morning, and by the evening you would hear they were dead,” Ben says.

Now they live together as a family of 13 in Imvepi. “I cannot separate them [from my own children]. Even the little we have, we share with them,” Ben says.

With the help of World Vision, the family have been given support and counselling – and have been allowed to stay together. “World Vision are not leaving us. If the children are sick, they come and take them for treatment at the hospital here. We appreciate them so much,” Ben says.

“We thank the Ugandan government so much for its leadership, for taking care of us. Without that we could not be here. And all NGOs… who have given us food and shelter.”

Ben and Beatrice are now encouraging the children to embrace life in the settlement, and to go to school. Nadal doesn’t need telling twice.

“I like going to school,” he says. He misses his old friends back in South Sudan, and his school there too – but “Uganda is more home than South Sudan because the education here is better.”

“I am happy now we have a foster family,” he adds. “The father takes us very well as his own children, and we integrate well with his biological children.”

Though life in Imvepi is much safer than at home, the children still have to sell a small portion of their food rations for extra money. And at just 16, Nadal is already thinking of the future. He wants to be a doctor when he grows up, just like his father.

“I want to use the money to support my siblings, to educate them and to construct a house,” he says.

Find out how you can support our work with refugees from South Sudan here.

*Names have been changed to protect identities.

One way or another, children around the world are getting back into education. Find the top 5 reasons why it matters.
Please give to the South Sudan Refugee Appeal now