From Hunger to Chef Dreams

9-year-old Rosemary doesn’t know the hunger and hardship her family used to face. She knows only the good times. Since the arrival of goats from World Vision’s Must Have Gift’s catalogue, Rosemary’s family’s situation has changed and she can now pursue her dreams of becoming a chef. 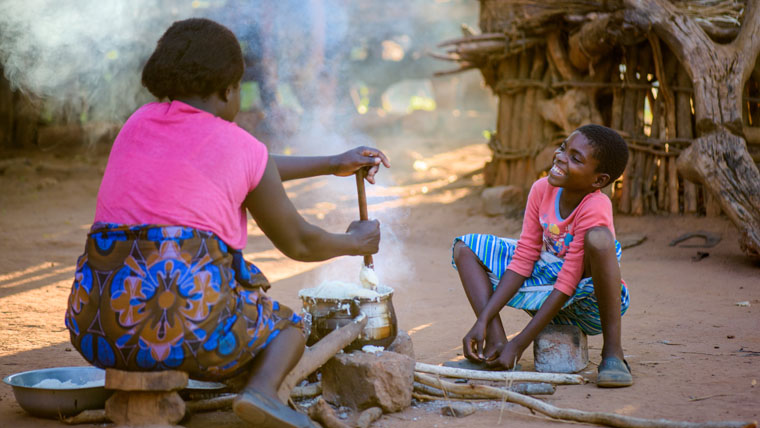 Rosemary and her grandmother, Patricia, sit outside together stirring corn porridge in a shiny metal pot over an open fire. They have a special pot for Rosemary to use to cook in, one that’s appropriate for her size. Porridge is one of Rosemary’s favourite foods.

Just a few feet away, Rosemary’s grandfather, Danford examines an upside-down bicycle he’s working on. His solar-powered radio plays in the background.

Stirring the pot is good practice for Rosemary; she has big dreams of becoming a chef someday.

“I love it because of the tea. I want to be drinking tea,” she says explaining the allure of her imagined career in the kitchen. But then she adds: “The other thing is because I love cooking for other people.”

Patricia and Danford delight in nurturing Rosemary’s dream, but they realise its irony. They used to struggle to feed their family and now their granddaughter wants to spend her day surrounded by food, cooking meals for others.

Not too long ago, anything about this evening’s scene would’ve been beyond their imagination. The family struggled just for survival. 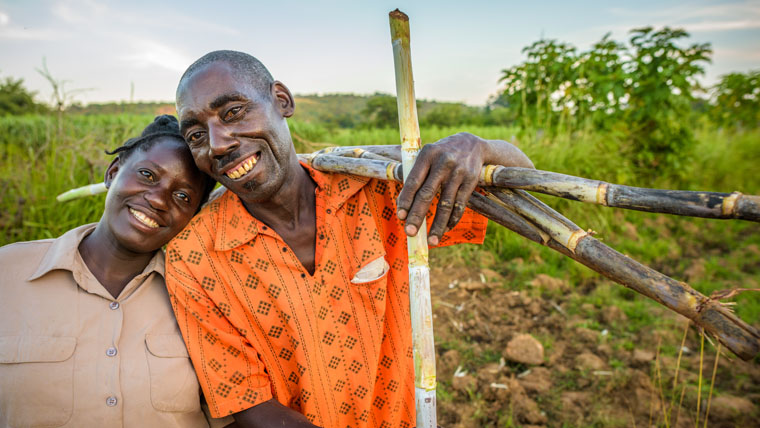 Both Patricia and Danford came from poor families in rural Zambia. After they wed in 1987, their poverty continued. They struggled to feed their growing family.

Patricia says, “We hoped, through hard work, to transform our children’s lives, but things never worked out as we thought.”

Despite trying, they lacked the means to buy basic commodities such as salt. Danford picked up any labour he could find. He worked as a blacksmith, earned a small salary in the hammer mill, tried shoe repair and even patched up people’s clothing. During drought, he would cross distant mountains if he heard about an area that had more food.

“We were being forced to borrow,” says Danford and that was just to have any food. But the borrowing only drove them further and further into poverty enslaving the family, Danford says. 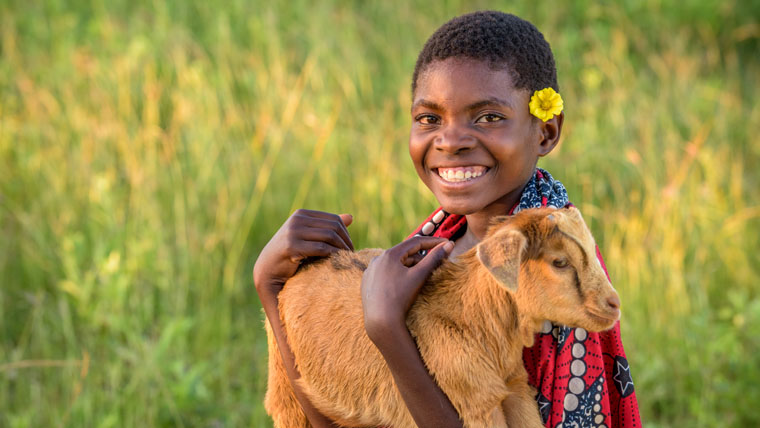 The arrival of hope

In 2010, World Vision arrived at Rosemary’s community. Having been identified as a family who faced great needs, Danford and Patricia received goats through World Vision’s Must Have Gifts.

Before they got the goats, we trained families on how to care for the goats, such as how to build goat pens and offered lessons on best practices for keeping the animals healthy.

Danford says, “When I received the goats, I told myself here comes the freedom.” He knew he wouldn’t have to borrow and place himself in anyone’s debt anymore. “This is the end of the suffering that my family has been going through.”

Things started improving quickly for Rosemary. She was only a little girl when they arrived and they provided nutritional support so she could be healthy, not hungry. As she grows, the number of goats will also grow so there will be plenty to support her educational needs.

The combination of goats and sponsorship has greatly improved life in Rosemary’s community.

The impact can be seen throughout. “I used to spend much of the day getting water,” says Patricia. Now, solar panelled boreholes pump water near to everyone’s houses, meaning Rosemary doesn’t have to walk long distances to collect water. She’s growing up healthier because she’s got clean water so readily available. A nearby clinic is being converted into a hospital, and we have offered a series of training courses on bicycle repair, agriculture and the importance of educating children. Danford is now a hygiene promoter and spreads the message of sanitation and hygiene around the community. 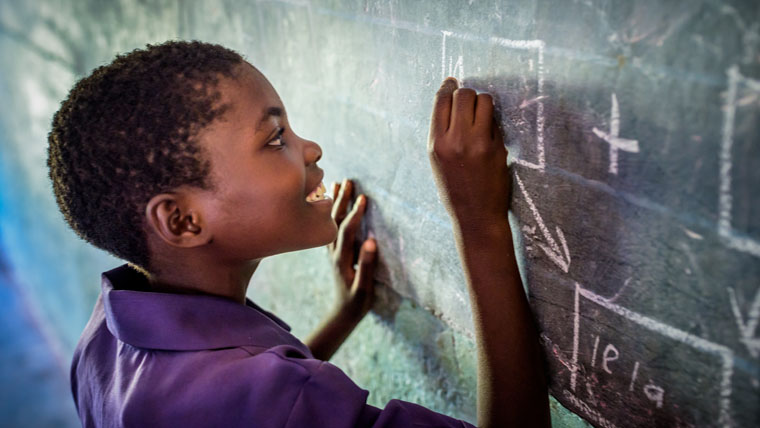 The impact on education

The animals enable Rosemary to attend school and pursue her dream of becoming a chef.

Rosemary sits in her second-grade classroom, her school uniform clean, not worn. Her hand flies up eagerly to answer the teacher’s questions. She’s ready with a smile for her classmates and friends.

She doesn’t hear her stomach grumbling like her father did. She’s one of the top students in her class and especially enjoys science and math. And after classes, she still has leftover energy for a game of netball and time on the seesaw with Tassy, one of her closest friends. 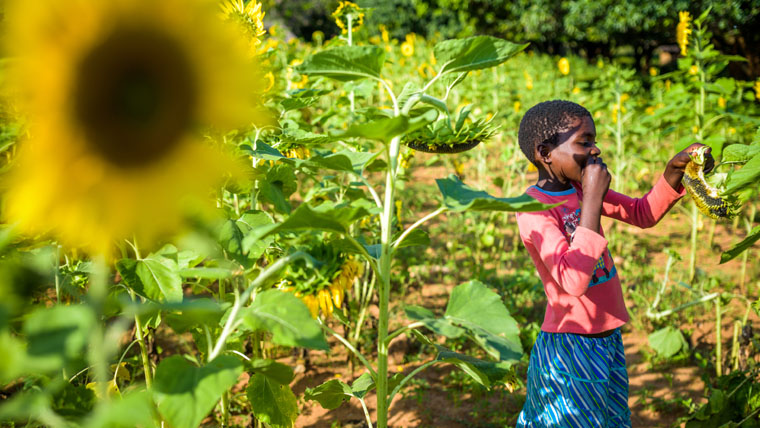 Planting seeds for the future

During times of hunger, Rosemary’s family used to farm a small plot of maize and had a quarter hectare in which they grew sugarcane to sell. The maize produced barely filled a small oxcart halfway to the top.

Now, thanks to the additional income provided by the goats, they have been able to expand the sugar cane field. Their tiny sugarcane crop has grown from a quarter hectare to two. They plan to increase that to three hectares in the next harvest and the oxcart that they used to struggle to fill halfway, was filled last year six times. They still have maize left over from last year’s crop, and they have a full field they have yet to harvest this year.

They’ve also expanded into growing sunflowers, not only for the beauty they offer, but also for sunflower seed oil. They’ll use some of the oil themselves, but most of it they’ll sell. For a family who never used to be able to afford even salt, cooking with oil is a luxury beyond anything they could’ve dreamed.

Rosemary loves wandering through the flower fields and popping a few sunflower seeds in her mouth, but the goats remain one of the most special parts of her life.

She herds them just after the morning dew has dried. She’s most often the one who does the milking. She loves to mix goat’s milk with maize to make porridge. It’s helping her grow up healthy and strong. 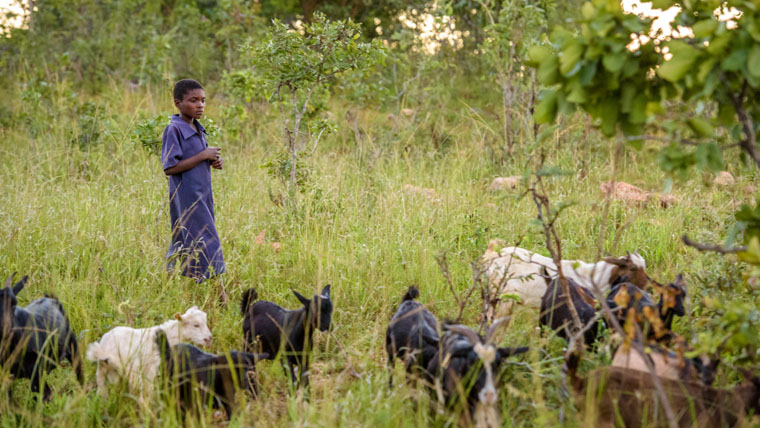 The goats act as a bank for the family. It’s money in reserve for them when they need it.

Last year, the goats came to the rescue when money was needed for health insurance. Late one September evening, Danford tripped over a branch and broke his leg. Thanks to the goats, they had ‘savings.’ Patricia knows that without the goats, they could have never afforded the treatment.

Despite being previously shunned by the community, who lays great value on owning animals, Patricia and Dunford have now become the family on whom people depend on. Because of the goats, Patricia and Danford have diversified their crops and no longer depend solely on maize fields to feed the family.

“Our children and grandchildren are now able to dream more and more because there is a lot of hope in what World Vision has done for us,” says Danford.

World Vision’s Must Have Gifts catalogue works with communities to identify families who face the greatest need. All the gifts have been specifically requested by the communities, thus making a real difference to the lives of families around the world. To buy someone a gift that can change their life, click here. 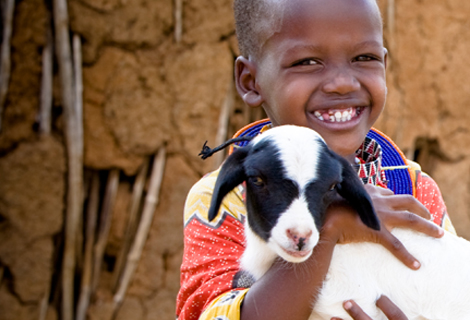