This year’s poor rains and drought from El Nino have greatly affected the lives of 12-year old Elida, her two brothers, Christopher, 21, William, 16, and their grandmother, Emma. With the help of World Vision, Elida and her family have been receiving food packs from our office, provided by child sponsors to reach the most vulnerable families. 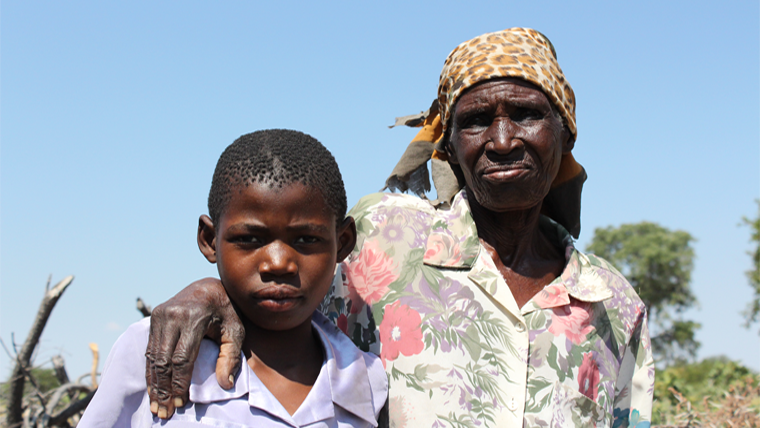 Earlier this year, they went for three weeks subsisting entirely on water and okra. As they lay on the floor for several hours, losing consciousness and unable to walk or crawl, it was a World Vision staff member, Mildred Nleya, who came to the rescue of the dying family. When she found them, none of the four could speak.

Elida is one of the untold numbers of children hit hard by this year’s double blow of countrywide drought and global climate change, which has affected rainfall patterns across the world and brought crisis to sub-Saharan Africa, including Zimbabwe.

“She could have died but God did not allow her to depart so soon,” said Emma, Elida’s grandmother who looks after the family. “We now smile at life and know there is a God out there. The way we were saved initially by Mildred, and then later by the staff at Sanzukwi ADP will never leave our memories.”

A five kilogramme bag of cornmeal and relish was all it took to save Elida and her family from the jaws of death as she, her brothers, and her grandma lay in the house for days unnoticed by their neighbours.

The breadwinner of the family, Elida’s grandmother has survived the last 20 years selling handcrafted products, goats and chickens. Lately, business has been low as the community she lives in, like everywhere else, has been hard hit by the drought. Villagers do not have income to spend, not even on food.

Until February, Elida and her family had been receiving help from the government, but when the payments stopped, her grandma had to find other means of fending for the family whose needs include food, Elida’s school fees and uniform, and fees for health care in emergencies. 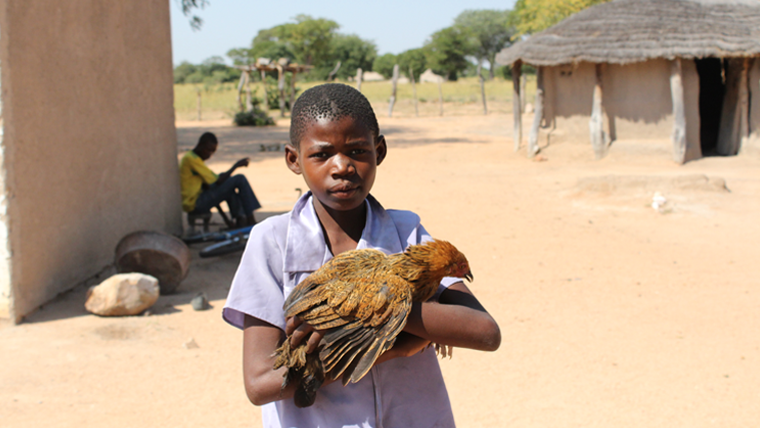 In the last 12 months the family sold seven of their 10 goats and over 20 chickens to make ends meet. With the dryness of the area, working the land has become increasingly difficult, except for areas where there is irrigation, and as the government help came to an end, so, for a time, did Elida’s education.

“I could not go to school because my school fees had not been paid.” Elida said. “I was out of school for two months and I only went after we had raised enough money to pay the school fees. During the three weeks we had no food I could hardly walk and going to school was the last thing I could think of. All I prayed for was a simple meal in a plate which I could not get.”

Since Mildred’s intervention, Elida and her family have been receiving food packs from our office, provided by child sponsors to reach the most vulnerable families in Sanzukwi. The family now receives a 50 kilogramme bag of meal, as well as oil, beans, and other basic foodstuffs. For now, the food packs are the family’s chief hope for food.

“If ever you have to pray for us, please thank God for the mercy He showed us when we were on the brink of death,” Elida told us.““Life has been different and difficult for us as a family as rains have not fallen on time. We thank our grandmother for being there for us at every minute and for World Vision for intervening in our situation when the situation really got bad.”

UNICEF warns that malnutrition is on the rise in Zimbabwe due to a severe drought, leaving four million people in need of food aid. Through our child sponsorship work, as well as with money from the British government’s Department for International Development, we've so far been able to help over 356,000 people who've been affected in southern Zimbabwe. Through our El Nino Crisis Appeal you can help us support the over 1.7 million people affected by El Nino across nine countries in Southern Africa»