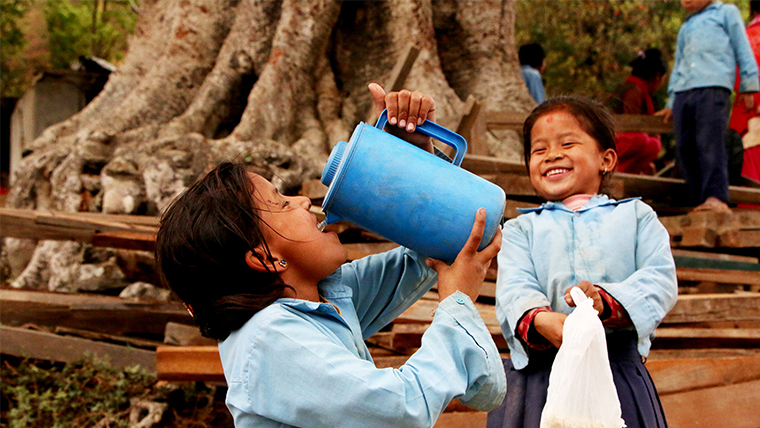 Almost a year on from the series of earthquakes that shook Nepal last April, World Vision has been working hard to restore safety, healthcare and dignity to children and families still in need. Deprived of clean water and proper sanitation in the aftermath, 16-year-old Arun marks World Water Day by telling us how his family is now enjoying the benefits, with the support of World Vision...

In a school in the Dhading district of Nepal, a temporary learning centre now serves as a school for 65 students. Rebuilt a month after the earthquake, it replaced the damaged school which lies in ruins nearby.

Children have lessons inside makeshift classrooms made of iron sheets, before breaking for lunch. They shelter under a big mango tree, just begun to bloom, to eat before playing during the break.

Eight-year-old Kripa and her friends are taking a pause from the games to pass around a big blue water jug and quench their thirst.

“Pani khana anunuhos!” - she shouts to her classmates, asking them to come and drink the water. She pours the water directly into the mouths of the younger ones who can’t carry the heavy jug. The children continue playing until the school bell rings, prompting them to return to class.

Kripa and her classmates are lucky to still have drinking water. A year after the earthquake, access to clean water is still a challenge in many of Nepal’s worst-hit zones, especially those lying outside Kathmandu.

One such district, Bhaktapur, which lies east of the capital, was left with devastated villages, dried-up water sources, damaged pipes, and toilets destroyed or rendered unusable. 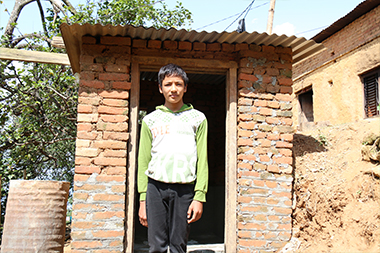 Lack of proper water and sanitation had left children like 16-year-old Arun and his family vulnerable to diseases like cholera, as health conditions worsened for local families. Not far from his house, World Vision-contracted labourers are busy repairing cracked water tanks and restoring running water to the local community.

“The water tanks have to be repaired as soon as possible so the villagers can have a safe water supply,” Arun explains. “We were really worried about dried-up water sources, but thankfully rains are replenishing them during the monsoon.”

The impact of the earthquake ruined the top floor of his family home, including the toilet, which left his family reliant on neighbours’ facilities. That was, until we provided the materials with which to construct a new toilet.

Still at school, Arun has spent much of his spare time helping his parents to construct the toilet by carrying bricks and water to be used in the cement mix. Now that it’s complete, the toilet will be key to keeping Arun and his family healthy. 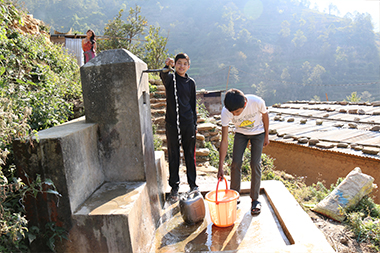 Thanks to our supporters, over the past year World Vision has been able to reach over 380,000 people in some of the worst affected areas, with a focus on health, education and restoring people’s livelihoods. It is estimated that around eight million people are still in need; almost a year after the earthquake many are still living in informal shelters. You can read more about our ongoing relief effort by visiting our Nepal Update Page »