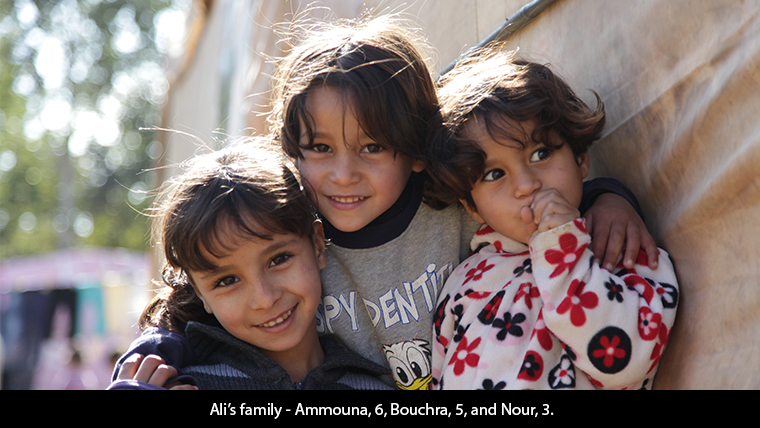 For father-of-four Ali, fleeing the conflict in Syria was only the start of his families’ hardship. Reaching the relative safety of a refugee camp in Lebanon, it was the difficulty in obtaining safe water that was not only a daily struggle, but also a real health risk. But thanks to a World Vision ‘Water, Sanitation and Hygiene’ programme, the availability of clean water is helping to keep Ali’s family and the wider community healthy.

Five years ago, fearing that fighting would reach their home, Ali and his family fled to a nearby village in Syria, with the hope that the situation would improve in a couple of days. Feeling detached from their home, and hoping that the conflict would pass, they decided to take a risk by returning. When they arrived, they found that their home had been bombed and lay in ruins. Ali told his family that it was time to flee Syria altogether.

“We didn’t have any option but Lebanon,” he says.

Ali, his wife Zeinab, and his four children crossed the border and joined a tented settlement at a refugee camp in Lebanon. Three years on, they were still sharing one big tent with Ali’s elderly parents and his three sisters. But living space wasn’t the biggest problem; it was the issue of getting clean, safe water that was making their lives even more difficult.

“I was eight months pregnant and I used to carry heavy containers of water from the water spring, located nearly a mile away from our settlement,” recalls Zeinab, 26. The family had no water to drink, and buying water cost them around 70p per litre - an amount they couldn't afford. The only solution was a 20-minute walk to the spring to fill gallon-containers of water, which they then carried back for the 11-member family.

Worse still was the journey to get water for non-drinking uses like showering, cleaning the tent, and washing dishes and clothes. The family had no choice but to use sewage water.

“Suffering” is how Ali's sister Khadijah, 30, describes their first year in Lebanon.

“The water was full of worms and the colour was extremely disgusting. We used to get skin irritations and fungi all over our bodies,” she says. As she talks, she points at her legs and imitates the way they used to scratch their bodies. 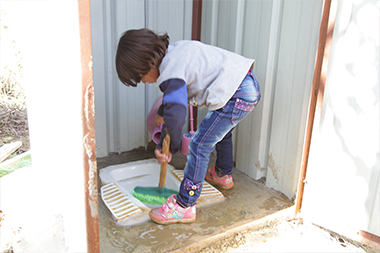 “My children were getting sick due to the dirty water, so I said that it was enough,” says Ali.

As a temporary solution, he and some other men from the camp worked for three days drilling an unprotected well. But the water still wasn't completely clean and the well dried up during the summer.

In late 2013, the family’s situation changed for the better. The reason, according to Ali, Zeinab and Khadijah, was World Vision’s Water, Sanitation, and Hygiene (WASH) programme, funded by UNICEF. Dirty sewage water was replaced with clean water filtered in-house, which helps to reassure Zeinab that the water she is drinking is safe for both herself and her unborn baby.

“Water is life. In emergencies, refugees can endure many challenges except the absence of clean water and toilets,” says WASH project manager Amjad Daoud. Toilets have now been installed next to tents, and families now have access to a weekly supply of water, along with soap, hygiene and drainage kits. To accompany this, hygiene-awareness sessions are also run to help promote good hygiene practices in the community. 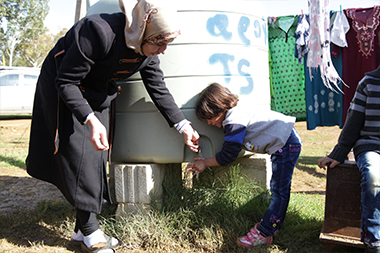 Although the WASH team is responsible for cleaning and filtering the water provided in the new water tanks, awareness sessions train refugees how to sanitise their own water. Khadijah's experience with the WASH programme has given her motivation to ensure as many people as possible can benefit from the programme’s training. She now volunteers to help educate children in the settlement about effective ways of washing and staying clean.

“Each time I learn new things, I share it with the children living here,” she says.

For Ali, Khadijah, and Zeinab the introduction of WASH services in the settlement has been vital in improving their safety and quality of life.

“At least we feel that there is still someone who cares about us,” says Ali, holding his two young daughters close.

To date, over 1 million Syrians have sought refuge in neighbouring Lebanon. With almost 70% of Syrian refugees living below the poverty line, easing the burden of obtaining clean, safe water has been a crucial step in improving their quality of life. World Vision has been working to improve the quality and availability of water by implementing WASH programmes that have reached 27,206 beneficiaries, like Ali and his family. You can read more about how we are responding to the Syrian Refugee Crisis here.