Waiting to start a new life 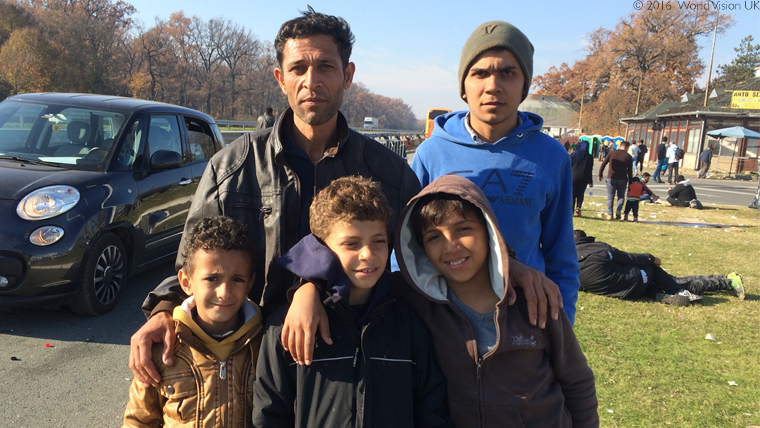 Looking at Fahad’s face, it’s hard not to notice the combination of exhaustion, frustration and despair that seems permanently etched into his expression. The 38-year old Syrian refugee looks at least a decade older, having spent the past two years fleeing from his home in Syria with his wife and five children.

Now, resting on a blanket at a roadside auto service centre near the Serbian town of Adasevci, Fahad tells of his decision to take his family away from the Syrian city of Aleppo during the fighting in 2013. The family spent two years in Turkey, but with little or no opportunities for jobs for himself and his wife, or for his children to obtain an education, he recently took the risky decision to seek sanctuary in Europe.

In early October, the family made the perilous journey by sea, crossing the Mediterranean and landing, relatively unscathed, in Greece. By this time, the group they were travelling with from Aleppo and other nearby Syrian cities had grown to approximately 20, and after crossing Greece and Macedonia by a combination of buses and walking, the group arrived at the Serbian frontier, where Fahad says he paid €55 to be taken to the Serbian capital of Belgrade.

Fahad tells his story in a matter-of-fact manner, but other families in the group are more vocal and clearly angry over some of the things they have endured. They tell stories of children and mothers getting slapped by police for stepping out of line while waiting for transportation. Others mention being briefly detained in camps with no access to water or toilets for 24 hours.

Fahad maintains his calm demeanour as he listens, but the weariness in his face makes the toll the journey has taken clearly evident.

But his pride as a father can’t be denied as he calls his sons over to stand and be photographed.

“We do everything for them, for the children,” he tells us as he lines up his three eldest boys. Nine-year old Muhammad, eight-year old Mahmood and 12-year old Mahmood Asemka obediently line up to stand beside their father.

Despite all they have endured, the boys look well dressed and in good health, which is more than can be said for other refugee children in Adasevci today.

Soon Fahad and his family will reboard the buses for the next stage of their journey. They and thousands of other refugees who pass through this part of Serbia will take with them some food, water and warm clothing provided by World Vision. Since September we’ve been able to reach more than 119,000 refugees, and have opened two child-friendly spaces. These spaces provide children with toys, crafts and games, giving them a safe place to play and allowing them to be kids once again.

Fahad says he wants to take his children to Germany, where they can hopefully get back into school and he can find a job. If Germany won’t allow them to enter, he says he will find another place, as long as he is allowed to work.

“We want to work,” he tells us. “We want a new life somewhere else.”

Join us this 10 February by simply going without your shoes and coat to stand in solidarity with children paying the cost of war. Set up your own Barefoot and Coatless fundraising page and ask your friends and family to join you in fundraising to keep refugee children warm. You can find out more here.