Freezing in the cold 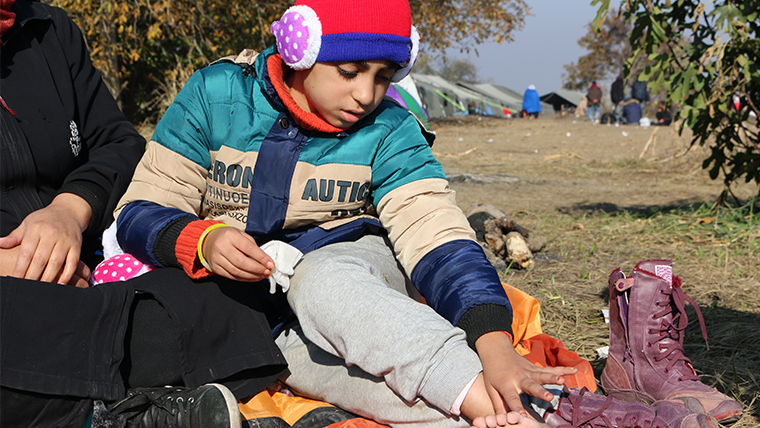 Sitting in the middle of an empty field near the border-crossing between Serbia and Croatia, Rima, a Syrian refugee is in tears as she describes how she felt when her eight-year-old daughter Aya begged her to let her die.

The family have been walking for days trying to escape the war in Syria. Early in their treacherous journey, they made their way to Greece from Turkey on a boat that was so overcrowded that they were forced to stand for twelve hours. But that was not the worst of it.

Now finally in Serbia, Aya is shivering as she painfully removes her socks and shoes to show me her frostbitten feet. 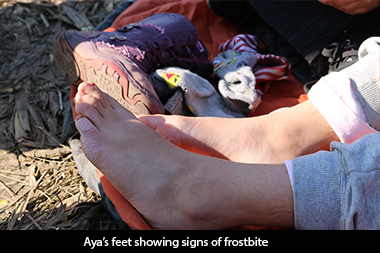 “I bought them in Turkey and they soon got wet,” she told me. “My feet became so cold on that boat that it was so painful to stand,” said Aya.

It broke my heart to hear Aya’s story and I can still hear her voice echoing in my head. I felt frustrated, angry and powerless to help. Europe was supposed to be the better place for them – away from all the fighting and horror in Syria. Yet at just eight years old, when we met, the cold had stolen Aya’s will to live.

Over a million people have crossed the Mediterranean last year. Almost two thirds of the refugees who have arrived in Europe are from Syria.

After making sure that Aya and her Mum would receive medical treatment for her feet, I walked closer to the border. It was freezing outside, but that didn’t stop families from waiting for authorities to re-open the Serbia and Croatia border-crossing point in hopes to continue their journey.

There was one-and-a-half-year-old Nada lying lifelessly on the ground, with nothing but a thin piece of cloth separating her from the frozen ground. Further along I stopped and talked to Ikhlas, a single pregnant mum who explained to me that during her journey from Iraq to Serbia, she’d experienced physical and verbal harassment, bribery, hunger and pain. Her two young sons had been sleeping on top of her to stay warm every night. Between that and the baby’s kicking, she hasn’t had any proper sleep in months.

These heartbreaking stories are endless. And all of this is happening in Europe. 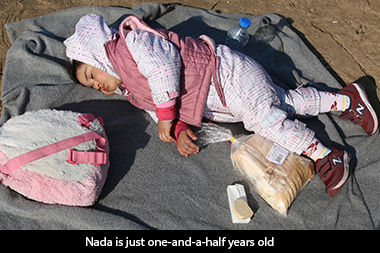 The temperatures have plummeted over the past few weeks. Just last weekend, Serbia had its first heavy snow of the season, with the temperatures dropping to -10C. Refugee families’ journeys are now ever more perilous. Adequate clothing and shelter need to be prioritised. Many thought that the influx of refugees to Europe would slow with the arrival of winter, but the UN Refugee Agency anticipates that 600,000 refugees are still expected to arrive in Croatia, Greece, Serbia, Slovenia and Macedonia till end of February.

More than 3,700 people have died making the journey to Europe last year. It’s now winter and hypothermia, pneumonia and other opportunistic diseases all loom. What will happen to those people? I’m fearful that I’ll hear more stories similar to what one refugee woman told my colleague when asked about her journey so far. She emotionally explained: “I miscarried because I kept slipping and falling on the mountain.”

EU leaders need to agree on a plan that fulfils its legal and moral obligations to protect and provide for refugees, particularly children. Families especially those who have been walking from Greece to Macedonia are exhausted, stressed and in dire need of water, food, reception facilities and medical attention.

Unless more shelters are built, greater numbers of blankets, winter clothing, water and food are made available, and more funding is allocated for those still living in Syria and the surrounding region, we will be seeing an escalation of the humanitarian crisis on our shore.

World Vision UK’s Syria campaign, BarefootCoatless is asking you to donate so when more of our colleagues’ head to Serbia to assess the work there later this month, they won’t hear more stories like Aya’s. Just £14 could buy a proper winter coat for a Syrian child, and £50 could provide a coat, blanket, and shoes. You can donate now here.