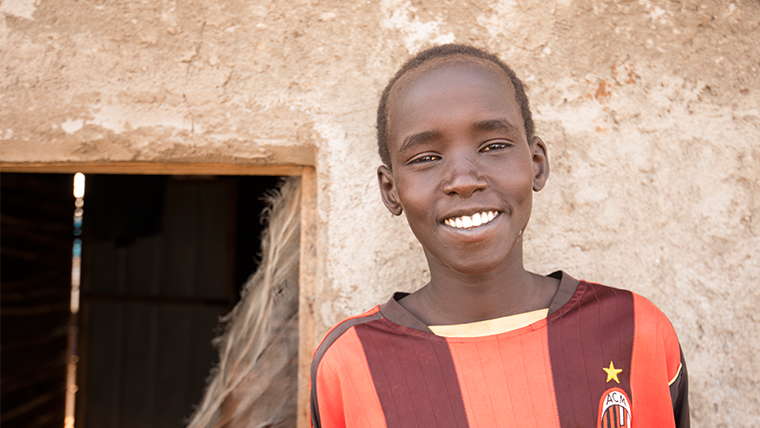 On the 15 December, 2013, violent conflict broke out in Juba, South Sudan. As it spread across the country, people who had lived side-by-side for years were suddenly pitted against one another. In Juba, entire communities fled to the safety of the United Nation base there, creating an impromptu protected camp (PoC) for tens of thousands of people.

Two years later, the camp is still there.

To enter, vehicles pass through three heavily guarded checkpoints. Visitors are met with the site of hundreds of identical rows of rectangular shacks covered in the same white plastic. 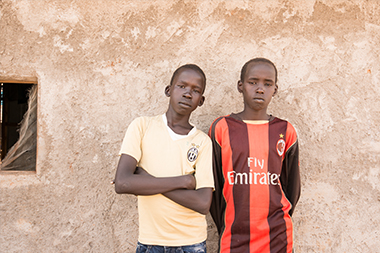 Living in these shacks are people who have been imprisoned by violence for the last two years, yet they have managed to make a life for themselves. There are grocery stores, hairdressers, schools, medical centres, churches, football fields and even a basketball court. The largest shacks are churches and entertainment centres. One of the latter looks onto the main street in the camp and has the games and times of major football games emblazoned across its plastic frontage. The games are screened inside on small televisions powered by solar generators. Patrons are charged 2 South Sudanese Pounds (about 10p) per game, but even at this low price, the screenings are well beyond the reach of most young football fans.

Two of these avid fans are Phouch and Liev. They are two of ten siblings who live with their parents in the camp. They were among the first to arrive over two years ago, originally settling in a makeshift camp on the other side of Juba.

“We walked to the PoC. We didn’t carry anything,” they told me.

Six months later, they were moved to the formal camp that is home to over 30,000 people. But still, no amount of security seems able to keep the violence completely at bay.

“The worst thing is that people fight here…they beat each other,” Phouch says.

United Nations peacekeepers do regular sweeps of the camp looking for, finding and confiscating weapons, but with increasing levels of violent crime in Juba, it seems that the conflict has infiltrated the entire culture.

Like most of the homes in the camp, the brothers’ is impeccably clean and tidy. It only takes Phouch a few seconds to find the football they have inside their two-roomed shack. 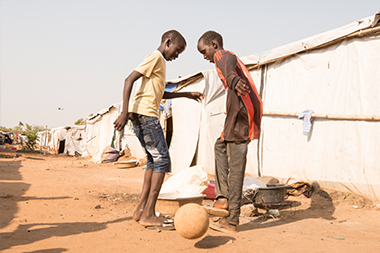 In the small space between the rows of plastic homes, the brothers start kicking the ball to each other, their skills well matched. Phouch’s favourite team is Barcelona - his favourite players, Lionel Messi and Neymar. Like Messi, Phouch is also a striker, and when you watch him swing into action with the ball it’s easy to see why the South Sudanese football team isn’t performing too badly.

Children have a way of finding their own peace and, almost every day for the last two years, the brothers have found theirs on the football pitch. Phouch and Liev form part of a team that play almost every day. In fact, Phouch says that the only good thing about living in the PoC is that his football has improved.

But no amount of football can change the fact that Phouch and Liev live in circumstances that no children should have to endure. The suffering they see around them is almost overwhelming at times.

“My neighbours have no food and water,” Phouch says. Even though it’s something that he wants to change, he realises that he is powerless on his own; South Sudan needs peace for their situation to improve.

Conflict in South Sudan has driven widespread displacement and destruction. As of September 2015, eight million people are facing acute food insecurity, of which an estimated four million, or 34 percent of the total population are severely food and nutrition insecure. As part of our ongoing response, World Vision has been improving access to clean water, food and education, so children like Phouch and Liev have a glimmer of hope for their future, despite their circumstances.