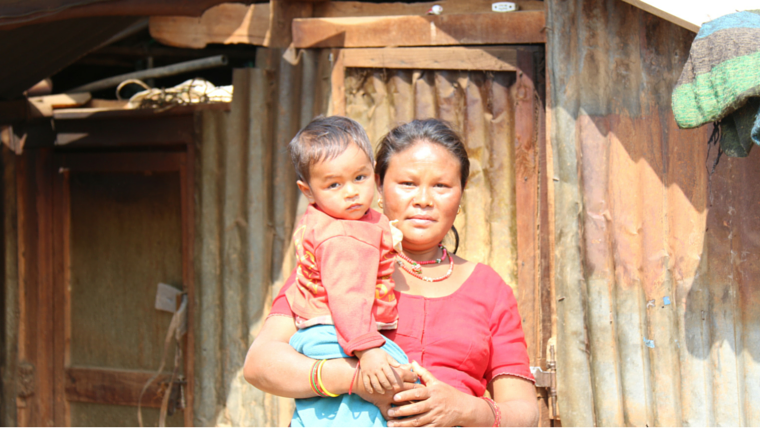 For many families in Nepal, the trauma of last year’s earthquake has been followed by uncertainty - homes lie ruined and the only options are temporary shelters made of wood and corrugated iron. Mother of nine Ganga knows all about the damage the earthquake brought. She now lives in a one-room shelter with her family. World Vision's Ankush Chalise recently visited one of the worst affected regions to hear how a training scheme for masons might be the solution to make families like Ganga’s safe…

"We’ll be at Bhimtaar in five minutes," Amul told me as we trundled along the narrow road.

Amul, the Shelter Project Officer at World Vision's district office, was taking me to Bhimtaar - a village in Sindhupalchowk, one of the worst affected areas, and where our new shelter pilot project is taking place. 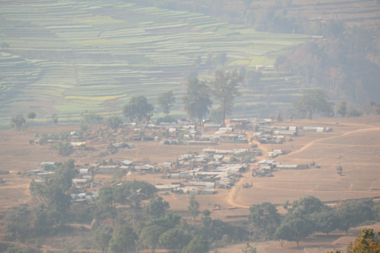 The grim picture of disaster was still very fresh in this 'Majhi' community. The devastating earthquake of 25 April and its subsequent aftershocks had swept away almost every house, leaving nothing behind in these indigenous communities. All that remains are collapsed buildings, small makeshift shelters and an alarming need to rebuild homes and lives.

Ganga's family is just one of the 152 households in Bhimtaar who lost their homes. She used to live in a house spacious enough to accommodate her large family before it was brought down completely by the earthquake. Now they all live together in a single room, which is all that is still standing beneath their temporary roof.

"It's difficult to share a room together, especially when you have grown-up children. But we have to accept any situation when there is no second choice," Ganga told me.

The additional threat from snakes and other harmful insects is also a concern.

"They can enter easily inside from the gaps between the wood and corrugated iron sheets our shelter is made of," Ganga explained. "I'm worried about the safety of my children. We just survived the freezing winter, and combatting the heat and rain of summer is next."

For Ganga, who almost lost her seven-year-old daughter Anjali in the earthquake, memories of the destructive aftermath are still fresh.

"We knew that our daughter was buried under the debris. I was desperate to see her alive again. Her face was blue and swollen and her legs were injured," Ganga remembers. 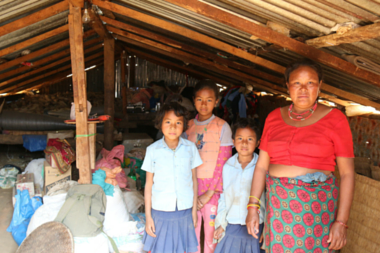 After five grueling hours, Anjali was finally rescued, only half conscious. Eleven months after the incident, she still gets panicked whenever there is an aftershock or the sense of an earthquake. Yesterday we felt a slight tremor and Anjali immediately clung tight to her mother, spilling the glass of water she had in her hand. But Ganga is happy that her daughter is beginning to cope with the frightening memories of disaster.

Before leaving Ganga and her family, she told me how important it was that any new houses were built to withstand the kind of destruction that had occurred before.

"We’d prefer living in this temporary shelter rather than building a weak house," she said.

But it's not just Ganga who is concerned about constructing safer houses at a cost affordable to them. Entire communities whose houses were made with mortar and stone by untrained masons have the same concern.

That’s why World Vision is looking forward to starting a masons’ training centre in Sindhupalchowk to help families like Ganga’s rebuild houses in a safe way, and out of materials that can reduce the impact of any future natural disasters. In addition to training and constructing sample houses, other activities to help support the local economy and help families find work will complement the shelter pilot project.

World Vision is currently working to support the recovery and rehabilitation of earthquake-affected families - helping children and families support themselves and repairing and reconstructing schools, health posts and water and toilet facilities to benefit the most vulnerable in Nepal’s worst-hit districts. We've reached almost 400,000 people since the earthquake last April, but needs continue. Find out how you can contribute to our rebuilding and rehabilitation work in Nepal »