What do healthcare and education look like in Uganda?

Two of our wonderful sponsors, Chris and Jon, recently visited Uganda and they have written a couple of blogs to share their experiences with you. In their first blog today, Chris tells us about a health clinic she had special interest in as a retired nurse and then Jon tells us about the impact World Vision has had (and is having) on two primary schools in the area: 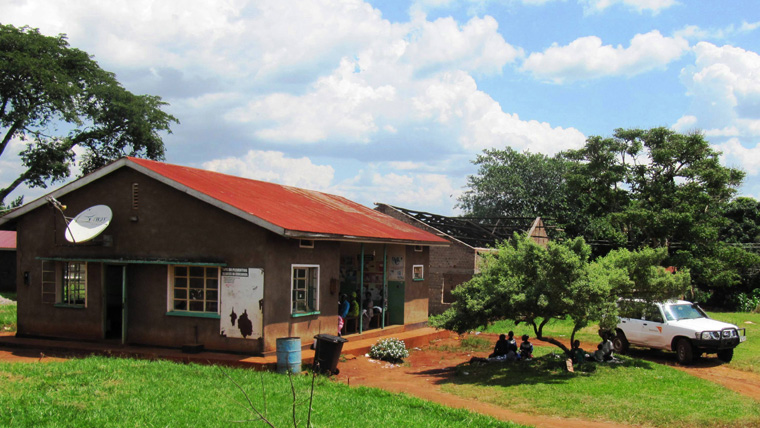 My husband and I were privileged to see some of the amazing work that World Vision does in Uganda. We drove 120 kilometres out of Kampala till we reached the main town in the region. When we arrived, the man in charge of the projects, Emilliam, was mopping his head in the cool office, but a little later he put on a thick jumper when we were outside in the sun. He was just getting over malaria but he still looked pretty unwell...

He explained that he had finished his treatment the day before and it was his first day back at work after a week off. I wondered how ill he had been before the treatment. He warned us of the dangers of malaria and suggested we apply plenty of insect repellents before going into the remote bush areas.

We were first taken to the health centre which was near the ADP office. I am a retired nurse, so I was very interested in the clinic and how it was used. The clinic seemed to be mainly manned by nurses, though there is quite often a doctor available too. The way it had been described to me, I was expecting something like a UK Cottage Hospital, but I soon found it did a lot more than that and the staff are hoping to increase its role to that of a district hospital, it being very isolated and in so much use. 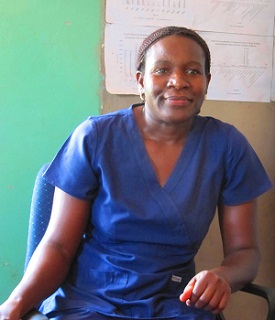 We met the Sister in charge, Annet, who immediately expressed tremendous gratitude for the donations we, and others, have given through World Vision child sponsorship. Through our donations, World Vision provided the clinic with a water tank which saves lives. Sister Annet explained that with this water tank, they can now perform some surgery such as emergency caesarean sections at the clinic.

Before the water tank was installed, women in labour had to travel along the dirt road for 45 minutes by car, often on foot, to get help at the district hospital if they were in difficulties. Frequently, they would arrive too late, and the baby and sometimes the mother, would die. Now, because the clinic has ready access to water, they can clean the operating theatre and perform an emergency caesarean section there at the clinic, saving the life of the mother and the baby.

In the UK, we take it for granted that we have good ante-natal and post-natal care. When we go into labour, it’s not usual to have to walk to the hospital for help, and if we need emergency surgery, we won’t be denied it due to lack of water. But in these remote areas where World Vision works, life is much tougher. 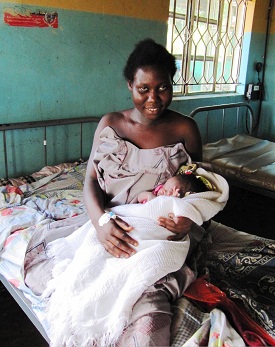 I myself had an emergency Caesarean section in the UK under the NHS, and indeed, I would have died if I had not received this intervention, so this touched me deeply.

Later, we were privileged to meet a woman and her baby who had been saved in this way just two days before. Sister Annet took me into the tiny 3-bedded post-natal ward. The baby had been in foetal distress and near to death, but the nurses realised this in time and rushed the mother to the operating theatre. Mother and baby are now doing well. World Vision money has saved the life of this tiny baby.

A few days before we went to Uganda, a contact of mine asked if we knew anyone who needed a working portable electro-cardiogram (ECG) machine. I contacted World Vision UK who said they would really love to have this machine. So while we were there, we gave it to Sister Annet with a book to help her read the ECGs and spot heart problems. 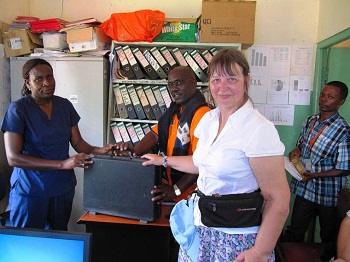 She was delighted to receive it for checking people who came to the clinic with chest pain, but also in the operating theatre, in case a patient became unwell during surgery. Up till then, they had no equipment like this to help them diagnose heart problems.

As we walked round the new Outpatients’ Department constructed by World Vision, Annet pointed out the ward for infectious diseases and the children’s ward. We also walked past the laboratory where people waited to have HIV tests. HIV is still prevalent in Uganda and many want to find out their HIV status. 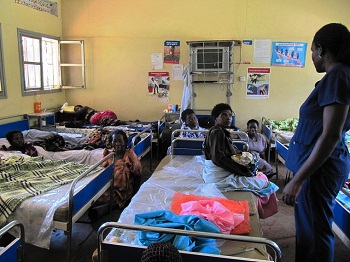 Finally, I was taken to the female medical ward. I found that the beds were crammed together with very little space between, beds down the middle of the room as well as the sides, and no privacy as there were no curtains or screens in evidence.

I think if I was sick, I would find it very stressful to be so squashed in with everyone, but the women I saw seemed grateful to be there. Annet explained that the main condition was severe malaria but also things like peptic ulcer. One or two of the patients had drips running but most did not.

Outside the ward, several women who were relatives of the patients were cooking food on tiny charcoal cookers. No hospital food here! It was quite an eye-opener!

One thing I realised was that while in the UK many of us are concerned about the problems of obesity, high blood-pressure, strokes, heart attacks and cancer, in Uganda they have a different set of health problems; malaria is a big killer and mosquito nets and repellents are a must; many children suffer from malnutrition and have low immunity to infections, from which some die as a result. This health centre and many like it, funded by World Vision, will help to improve the overall health of the population, and along with education, will improve the future of the children.

Getting teachers to school

After leaving the health centre, we headed off to visit two schools in which World Vision had been involved. Emilliam, explained that the aim was to improve education opportunities for the children in these remote rural areas and enable more to attend university, which was already happening. 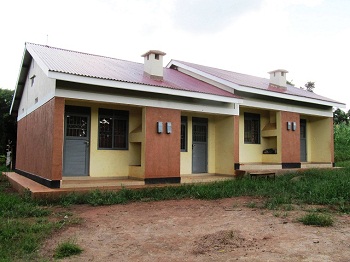 We visited a primary school, 4 kilometres from the community that has over 300 pupils, but there had been difficulties with teacher attendance at the school – not an issue we have to deal with in the UK!

The teachers lived in the rural communities far away and walked or cycled to school.  However, when the roads were flooded they were unable to make the journey, leading to classes having to be cancelled at short notice.

To address this issue World Vision had constructed four self-contained accommodation units, plus toilet blocks, so that teachers could live close to the school.  The headmaster explained that this made a big difference, as he could now be confident that at least four of his nine members of staff would always be on hand, which was already having a positive impact on pupils’ performance. 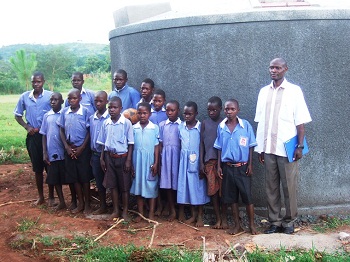 Another World Vision intervention had been the construction of a large water tower, as lack of water had also sometimes caused school closure.  Although lessons had ended for the day, there were still a number of pupils on the school playing field, and they rushed across to have their photo taken with their headmaster in front of the water tower.

Later on, we visited an even more remote local primary school. This school was also constructed by World Vision, and it stands in a clearing surrounded by fields of crops. 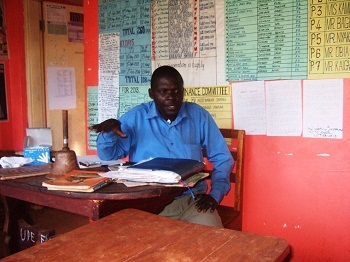 We met the headmaster, David, and looked in the classrooms, which, though fairly rudimentary, were large and had a number of learning materials decorating the walls.  David explained that the school currently has nearly 400 pupils and is growing.

World Vision plan to refurbish the buildings to accommodating so many pupils. We presented David with some gifts for the school: badminton and baseball sets, skipping ropes, balls and sets of colouring pencils which he was very grateful for.

We were impressed with the quiet dignity and dedication of the headmasters we met at the two schools, and it seemed to us that both schools are in good hands. The continuing involvement of World Vision, working alongside the headmasters and the local communities, will help every child get the best education opportunities possible and fulfil their potential. 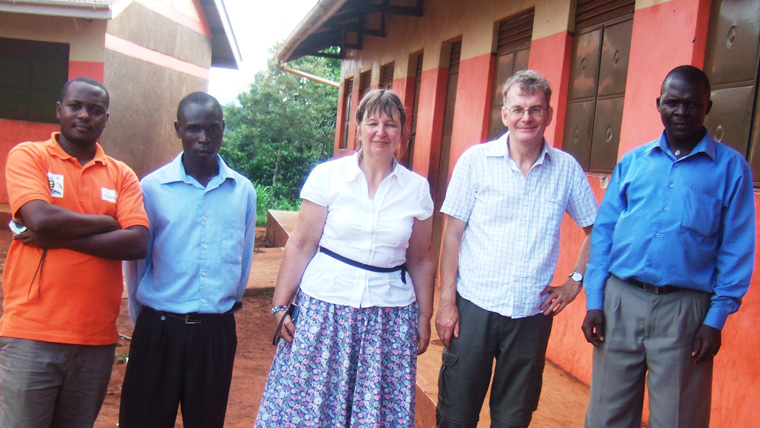 It's amazing to hear first-hand just what it's like to see the work that your support enables to happen in these communities. Thanks to Chris and Jon for sharing their stories – come back next Thursday for their second blog, where they tell us what it was like meeting their sponsored child, Sylvia.

If you could see first-hand one project in the community you sponsor, what would it be? Head over to our Facebook page and leave us your thoughts.